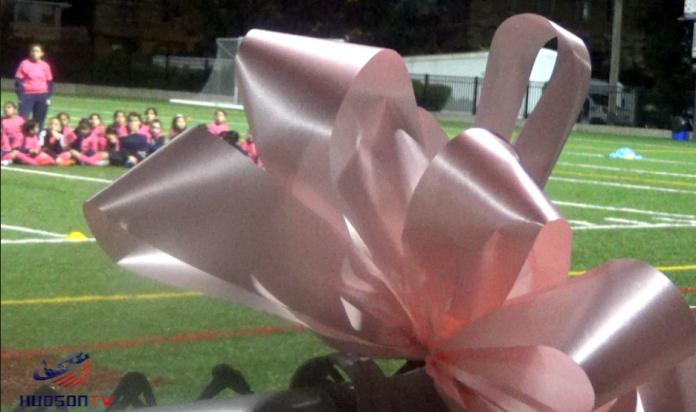 The “Let’s Tie One More Ribbon for Breast Cancer Soccer Tournament” at the Midtown Athletic Complex in Union City was a big hit and an education.

“It’s a great pleasure to be here supporting breast cancer awareness,” says Commissioner Wendy Grullon. “This illness can affect anyone.”

This event always has great value and meaning — when it comes to saving lives.

Union City Soccer Club’s Jose Renteria added that it’s a blessing to get the information out to not only women but also guys, like the commissioner said.

“I didn’t know myself — that guys should get checked out,” he says.

For Gabriella Best, the tournament was not only a chance to see her two sons play with the Union City Soccer Club, but to recognize just how crucial “Tie One More Ribbon” really means this time of the year.

The idea was to let the kids get out there and do their soccer thing while connecting them to the deeper message.

According to Commissioner Lucio Fernandez, they want for the kids to listen to their message of how important it is to do your mammograms and get your test done.

“So maybe they can go home and ask their mom, ‘mom, did you get your test; dad, did you get a checkup,’” the commissioner says. “It’s very, very important.”

And Sam Samaniego definitely knew the value of those few hours.

“To see my brother play and represent… think of the (breast) cancer,” the eight-year-old says.

From the mayor to the commissioners, the police department and the community, they all felt the strength.

“And the support of the city, especially the mayor — that has the doors open to the city so anyone can go there and get help,” says Renteria.

The kids get involved and then they can listen to what everyone is saying.

“Even if one kid, only one kid alone, one child alone picks up on the message and goes home and tells their mom, that’s worth it,” Fernandez says that’s everything.

If you do one thing for yourself, let it be this…

“That’s why we take this opportunity to remind every woman that it’s important to do a mammogram test every year,” says Grullon.

They have the right idea, starting young — getting this kind of education when it comes to health.

“Feels good that the kids were out here playing sports, being healthy… at the same time they listen to our message,” added Fernandez.

*It’s imperative to get an annual mammogram. If you need assistance, contact Mayor Brian Stack at 201-376-1942.