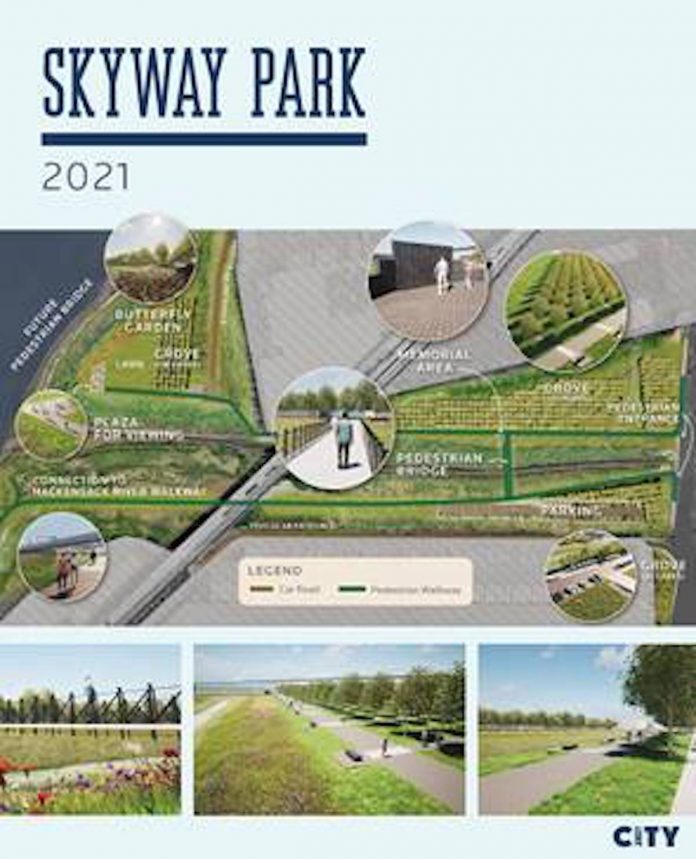 Over 500 Trees being Planted to Memorialize each Resident Who Died During COVID and Wasn’t Permitted a Proper Funeral Due to COVID Restrictions; Each Name will be part of a Memorial Wall at the Park

JERSEY CITY – Mayor Steven M. Fulop joined members of the City Council, Jersey City Parks Coalition, the Hackensack Riverkeeper, and the Skyway Park Conservancy on Thursday to announce the final transformation of a 35-year-old toxic Superfund site into over 30 acres of park space for Jersey City. The city’s $10 million investment will create public access to the open green space located along the Hackensack River waterfront.

The design includes a pedestrian bridge to connect various sections of the park, a pollinator garden framing views to the Hackensack River, a waterfront walkway, as well as a grove of 502 trees. Each tree will represent a Jersey City resident who lost their life to the COVID-19 pandemic and were unable to receive the appropriate funeral services due to the safety protocols in place at the height of the contagion.

“Skyway Park is the latest step in expanding our parks infrastructure and bringing further investment to the city’s west side,” said Mayor Fulop. “Within the new park, a tree will be planted for each of the over 500 residents who were robbed of their life and robbed of a proper farewell due to this pandemic to give their friends and family a place where they can reflect and remember their lost loved ones.”

The new Skyway Park will create open space for recreational and passive use, providing public waterfront access and significantly extending the Hackensack Waterfront Walkway. A pedestrian bridge utilizing design vernacular from the overarching Pulaski Skyway will connect across to a formal memorial installation and the tree grove. Every other row of the bosquet will have a path running perpendicular to the main promenade.

Beginning in 1970, the PJP Landfill site was used as a dumping ground for dangerous chemicals and industrial waste. The illegal dumping caused frequent spontaneous subsurface fires, putting the local community in danger until the landfill was capped in 1985 to eliminate additional exposure and prevent future contamination.

In 1982, the 87-acre site was added to the state’s Superfund list. Since then, the New Jersey Department of Environmental Protection (NJDEP) remediated the site. In addition to the new park, the site is now home to newly constructed warehouses and commercial use.

“I am grateful to have played a role in this 50-year saga that involved so many activists and officials across local, state, and federal governments, and I am pleased that Mayor Fulop is completing the transformation of the PJP Landfill Superfund site into the beautiful waterfront Skyway Park,” added Bill Matsikoudis, former Jersey City Corporation Counsel.

Access to open park space is proven to improve residents’ mental and physical health, property values, environmental impacts, community engagement, among other significant benefits, and as part of the administration’s commitment to expanding access to quality park space citywide, Mayor Fulop also recently announced the largest widespread park improvement initiative in decades. With the first allocation of the over $2 million generated by the Jersey City Open Space Trust Fund, the city is updating over 20 parks spanning all six wards based on community input. The largest Open Space funding recipient is the historic Reservoir 3 in The Heights, which has been a priority for the Mayor as well as the late Councilman Michael Yun, who passed away from the COVID-19 virus.

“Investing in parks and open space has remained a top priority as the return on these investments is invaluable. This newest park will be unique in that it will become a destination where we can feel connected to those we lost in these challenging times, and I’m honored to commemorate the late Councilman Yun, former police officer and Councilwoman Viola Davis, and the many others who have made a significant impact in our community,” concluded Mayor Fulop.