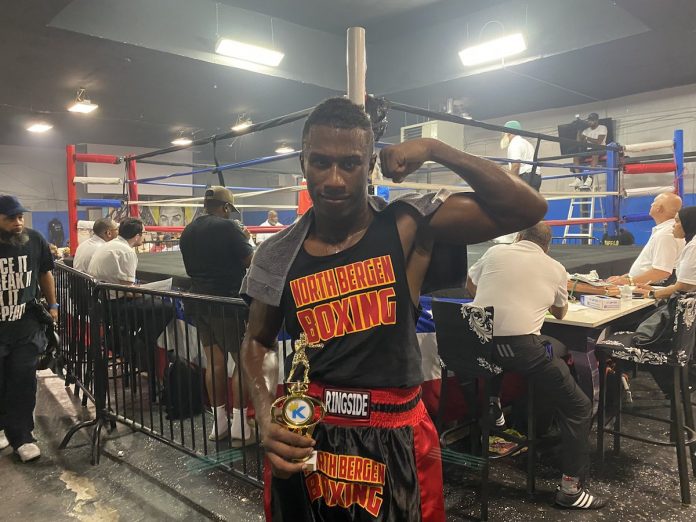 It was a dominant performance from start to finish for the 22-year-old resident of West New York, N.J., who scored three standing eight counts against the slick southpaw to force a referee’s stoppage. The crowd at Ortiz’s home gym began the fight cheering loudly for the 30-year-old Ortiz, but was quickly silenced by the heavy right crosses and body punches from Valencia.

Valencia celebrated by running the “Rocky Steps” outside of the Philadelphia Museum of Art and enjoying a Philly Cheesesteak at Max’s Steaks with head trainer Ryan Songalia and assistant David Almodovar.

Valencia came to “The City of Brotherly Love” with vengeance on his mind, as he sought to even the score 27 years after a boxer from his hometown of Esmeraldas, Ecuador named Segundo Mercado was knocked out by boxing legend Bernard Hopkins of Philadelphia in a world title fight. It was sweet vindication for Valencia to have his hometown announced by the ring announcer after the fight.

“It was my personal mission to get revenge for the boxers from Esmeraldas,” said Valencia, who moved to Barcelona, Spain at age 17 and relocated to New Jersey this past June. The boxer known as “El Verdugo de Esmeraldas,” or “The Executioner of Esmeraldas,” now trains out of Little Mac Boxing in North Bergen, N.J.

The win is the second straight in a week for Valencia, who dominated Mitch Desir the week before in Trenton, N.J. to earn his first victory since coming to America. His amateur record now stands at 8-1.

The win was the final tune-up for Valencia before competing in the New Jersey Diamond Gloves tournament, which kicks off on October 8 and runs through November 6.

“’El Verdugo’” sharpened his axe, and now the Diamond Gloves tournament is approaching. I’m going to knock all of my opponents out,” said Valencia, who will compete in the 156-pound novice division.