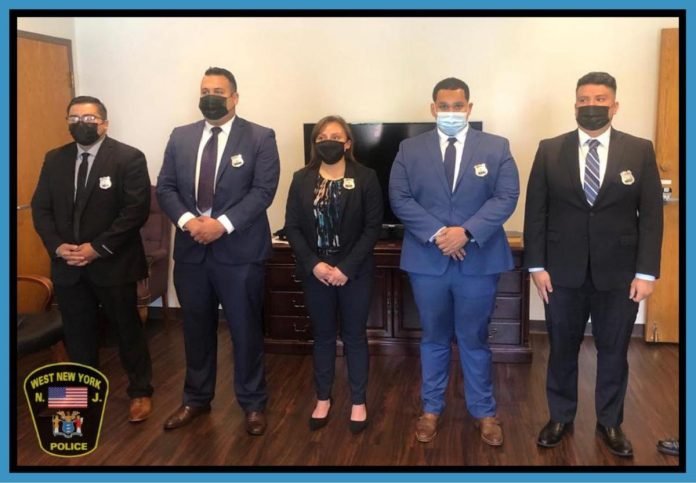 Mayor Gabriel Rodriguez, The Board of Commissioners, and The WNY Police Department Promote and Hire New Law Enforcement Officers

WEST NEW YORK, N.J.– Mayor Gabriel Rodriguez and the Board of Commissioners along with the West New York Police Department are excited to announce the promotion of various hard-working officers and the hiring of new Law Enforcement recruits.

“Our recently promoted Law Enforcement officers have been with the Town for many years, each having a long list of accolades.” Mayor Gabriel Rodriguez discussed, “The Town of West New York is extremely proud and grateful to have each and every one of these devoted officers on the police force.”

In addition to the promotions, Mayor Gabriel Rodriguez swore in five (5) new Law Enforcement officers to protect and serve the Town of West New York. The new recruits are: Gudiel Ventura, Jeffrey Giron, former WNY EMT Erica Sotamba, Anthony Tapia, and Francisco Escobar. Two of the recruits will be attending the new Hudson County Police Academy while the other three will be attending the Bergen County Police Academy for approximately six (6) months.

“It always brings me great joy to swear in new Law Enforcement Officers that serve our community and keep the residents of our Town safe,” added Mayor Gabriel Rodriguez.

This is the second round of promotions and third round of new hires under the administration of Mayor Gabriel Rodriguez, the first promotions taking place on February 19, 2020.