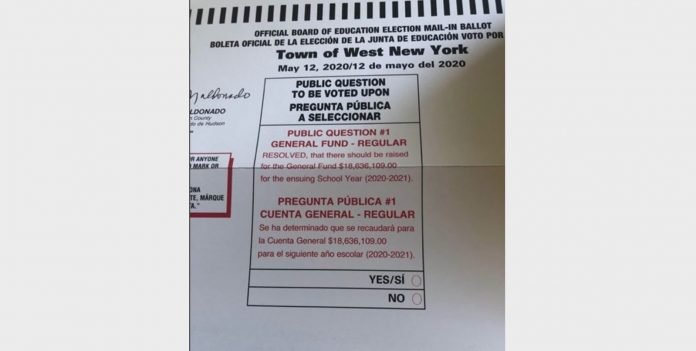 Due to the coronavirus pandemic, Governor Phil Murphy several weeks ago announced that school board elections, including ballot referendum questions in New Jersey, were being moved from the month of April to May 12.  In addition, with school buildings being closed due to concerns over social distancing, the elections would be done for the first time in the Garden State’s history, through the mail in the form of vote-by-mail ballots.

In West New York, residents will be deciding the fate of the Board of Education’s school budget tax levy for next year when they fill out their mail in ballots, which must be received no later than 8 p.m. on Tuesday by the clerk’s office.

Board of Education President Adam Parkinson told Hudson TV that “the tax levy represents about a 4 percent increase over last year, but residents will only feel an overall tax increase of about 1 percent, which is how the town factored in the municipal and county portions from their budget.”  At least one resident contacted Hudson TV to complain that no explanation was given on the vote-by-mail ballot as to what the $18,686,109 for the General Fund would be used for.  When Hudson TV contacted West New York Superintendent of Schools Dr. Clara Brito Herrera for further details, she sent a Messenger response in return, saying, “It’s a school budget question. School budgets support high quality education programs and services for the students.”

Remarks made by Robert Unanue, the CEO of the Hudson County-based, Latino Food company giant Goya, praising President Trump, have led to a massive backlash on Twitter, with calls to boycott the company. During a Rose Garden speech at the White House, Unanue said the country is “truly blessed”...
View on Facebook
·Share

This is a Democratic country where we practice freedom of political expression, freedom of speech. Democracy provides an environment that respects human rights and fundamental freedoms. 🇺🇸🇺🇸🇺🇸

He has right to his opinion. This is AMERICA. I will continue buying!

Goya has done more for Hispanics than any of you boycotting. FOH

I don’t give a fuck about ones man political views !!!! I’m not going to help thousands of people loose their jobs they don’t know that CEO

Their products are disgusting any way Hahahaha

Goya all the way

This is why they want to boycott Goya: www.whitehouse.gov/presidential-actions/executive-order-white-house-hispanic-prosperity-initiative/

You guys who are boycotting are clueless. They praised trump for this. What is bad about that? Do any of you do any research of your own?

I get it freedom of expression, freedom to have your own opinion, anything you want I get it it's a free country, but For Heaven's Sake what is there to be blessed about this president? What has he done so great so far? It's a blessing?🤢. Obviously he did it not out of conviction, but out of convenience. He ingratiated himself because he was promised something by trumptard I am sure of it. Sheesh talk about integrity, where has it ended💩💩💩🤔

now why would a guy who sells high quality food at extremely reasonable prices support trump, while buffet sells kraft for tripple the price and hates him... Hmmmmm....

I for one will not be buying their products anymore!

Read the ingredients in Goya food, everything has (MSG) monosodium glutamate, for those of you who don't know what that is let me explain if you put a little bit of MSG on dogshit it will taste like filet mignon, it's a man-made chemical and it's very bad for you

Why not just fire the guy and the community can buy the condiments. One bad comment can’t wipe out our preferred condiments.

Ridiculous, the CEO went to the White House under Obama and Trump but he gets a backlash under Trump.