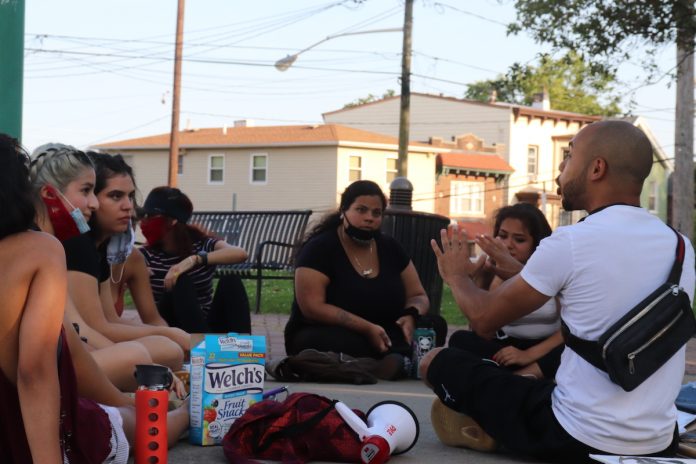 “WE ARE VANESSA’S ARMY!” Womxn of North Hudson’s Organizers chanted as people arrived on Saturday, July 25th, for the protest. The protest kicked off with a rally on the steps of the West New York Public Library with over 25+ supporters for Vannessa Guillen. The demands were loud and clear: launch a congressional investigation into the death of Vanessa Guillen, ban military recruitment in our public & low-income schools, and provide proper sex education to our youth with an emphasis on consent. Speeches by Lilliana Martinez (Founder of Womxn of NoHu), Jocelyn Rojas (Protest Organizer), and Lucy Chinea Del Gaudio (Army Veteran & Congressional Investigation Testifier) were directed toward West New York City Hall. The passion in the crowd grew as Lucy prompted the protesters to repeat the names of 5 womxn who, like Vanessa Guillen, were enlisted and murdered while serving the country. Onlookers included those fighting for justice for Vanessa and a plethora of uniformed officers.

Womxn of Nohu made a great effort in keeping the march as sustainable as possible. They offered a hydration alternative to plastic water bottles which included three (two of which were donated by Memorial High School) heavy-duty, reusable water coolers. Anyone without a reusable water bottle was given a paper cup to minimize waste. With the high at 88 degrees, the team worked to keep everyone hydrated with breaks throughout the protest for refills.

You could feel the power radiating off the group as they began their march through Bergenline. All passersby stopped to listen to the chants. “Oye Militario – Sale de mi barrio!” Chant Leaders Paloma Vizcaino and Hailey Benson took this opportunity to engage the community by inter-splicing messages in both Spanish & English of Vanessa Guillen’s brutal murder between chants. The audience’s eyes were glued to the group as they listened to their demands. As the collective made its way from West New York through Union City, they were led by a group of bike marshals who extended themselves for the cause, as well as the local PD. The police officers guided them haphazardly through the streets, almost hitting a protester in their mad dash.

As the group arrived at 49th Street Light Rail Station, they were pressured by the Police to move to the sidewalk for the performance of the Protest. A revolutionary Chilean Dance called “Un violador en tu camino” was led by Particia Danielle Cobos. Cheers rang through the area as the song belted “el patriarcado es un juez, que nos juzga por nacer, y nuestro castigo es la violencia que ya ves.” The reality of these words as a reflection of our own community sunk into the crowd as they continued their march to the final location.

They arrived at Washington Park with sweat on their brow and a sense of accomplishment. The protesters were offered the time to sit, eat, and reflect before the final rally began. Speeches by Lilliana Martinez, Paloma Vizcaino, and Hailey Benson emphasized how the lack of consent-based sex education and the invitation of military recruitment in our schools leads to violence against womxn, like the murder of Vanessa Guillen by a fellow soldier. Their voices resonated throughout the entire park. Hailey Benson asked the audience to meditate on what they are grateful for and what changes they’d like to see in our community. The final message left with the crowd was a moment of silence for Vanessa Guillen and all survivors of sexual misconduct in the army.