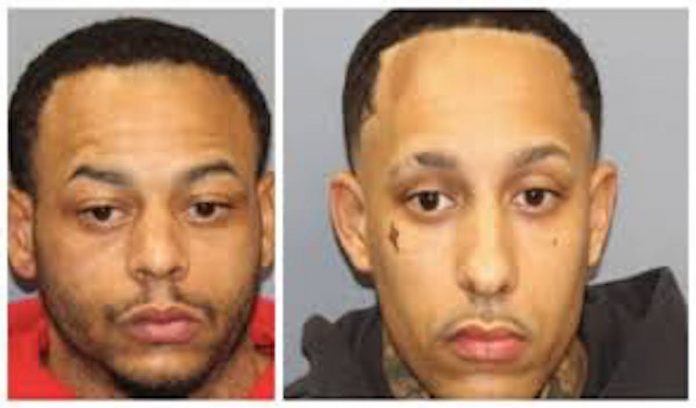 At approximately 9:13 P.M. on October 25, 2020, Secaucus Police responded to Seaview Drive for an armed robbery at gunpoint and knifepoint.  While enroute to the scene officers observed the suspect vehicle fleeing on Meadowlands Parkway toward Route 3 reaching speeds of approximately 100 mph.  A vehicular pursuit was initiated, but was terminated in Jersey City.  After the pursuit was terminated the suspect vehicle struck another vehicle in Jersey City and fled. There were no injuries reported as a result of the collision.

Additionally, while actively engaged in the vehicular pursuit, officers observed the occupants discard proceeds from the robbery along with other items of evidential value, which were all later recovered.    The suspect vehicle was abandoned and later located by a Hudson County Sheriff’s Officer in the parking lot of Dunkin Donuts at 507 Summit Avenue, in Jersey City.

A follow up investigation was conducted by the Secaucus Police Department’s Detective Division and Anti-Crime Unit and two suspects were identified.  On October 26, 2020, with the assistance from agents from Homeland Security Investigations (HSI) and the Port Authority Police Department, Brandon Weekley was arrested at Terminal A of Newark Liberty International Airport.

During the early hours of October 27, 2020, the Hudson County Regional SWAT Team secured the residence of Aymen Massaud on Herbert Place in Jersey City.  Aymen Massaud who is charged as a co-conspirator in the robbery, was arrested without incident.  At the time of his arrest, a knife was recovered in Aymen Massaud’s vehicle.

“I want to thank the Hudson County Sheriff’s Office for locating the vehicle used in this crime,” Chief Dennis Miller said.  “I also want to thank Homeland Security Investigations (HSI), under the leadership of Special Agent in Charge Jason J. Molina, U.S. Customs and Border Protection (CBP) at the Port of New York/Newark, under the leadership of Port Director Marty Raybon, and the Port Authority Police Department, for the apprehension of Brandon Weekley.”    “I also want to thank the Jersey City Police Department for their willingness to assist us in this investigation.”  “In a county such as Hudson, criminals are not confined by jurisdictional boundaries and these arrests were only possible because of the collaborative effort put forth by multiple law enforcement agencies.”

All calls can be kept confidential.