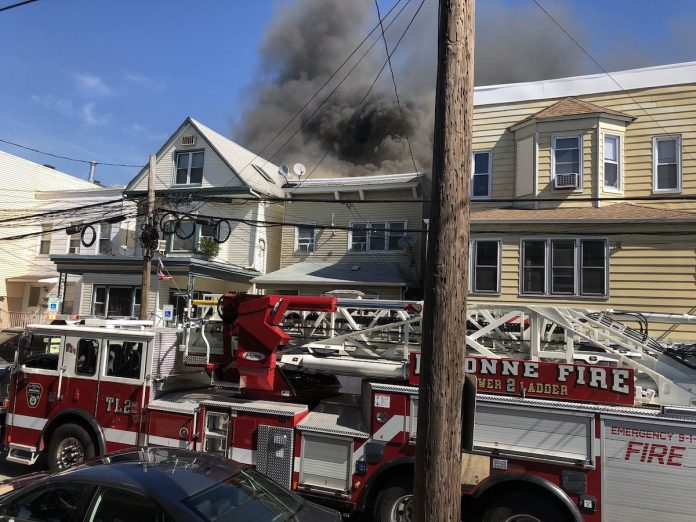 “Saturday, at 10:52am, firefighters were dispatched to a report of a structure fire at 65 West 18th Street. Arriving units were met with heavy fire conditions, with the fire already extended to neighboring homes on both sides of the reporting address.
Firefighters used multiple hand lines to attack the large fire. The incident progressed to four alarms, as multiple units were needed to help get the fire under control, which was declared at 12:20pm. Other nearby homes on 18th and 19th Street were evacuated as a precaution.
One firefighter suffered a minor injury and was transported to Bayonne Medical Center. He was released later in the day. The Bayonne Building Department deemed 65 and 67 West 18th Street as temporarily uninhabitable, while the occupants of 63 West 18th Street were allowed to return home. 14 occupants have been displaced from the two homes and are under the care of Bayonne OEM and the Red Cross. A fire investigation is currently underway.
“I want commend all the firefighters for their skilled and professional response, as their hard work prevented this aggressive fire from further spread on this tightly knit block. I want to thank our mutual aid partners from Jersey City for their work on the scene and North Hudson Regional Fire & Rescue for manning our firehouses. I also want to thank the Bayonne Police, Bayonne OEM, McCabe EMS, JCMC EMS, and the Bayonne Fire Canteen for their assistance at this fire.”