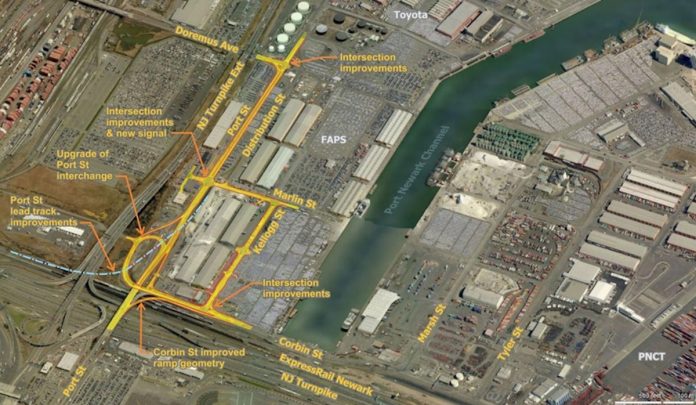 The Port Authority of New York and New Jersey today announced that the U.S. Department of Transportation has approved a $44 million infrastructure grant for road improvements at Port Newark, one of the bistate agency’s six marine terminals that make up the largest port complex on the East Coast.

The award is to be provided through the USDOT’s Infrastructure for Rebuilding America (INFRA) discretionary grant program, which aims to advance the Biden administration’s priorities to rebuild U.S. infrastructure through the funding of regional and national projects of economic significance.

USDOT announced the grant award to the Port Authority on July 1. As required under the Fixing America’s Surface Transportation (FAST) Act, Congress has 60 days to review proposed INFRA grant awards. After the 60-day review period, USDOT may begin to obligate funding.

The $44 million grant will go toward a $176 million modernization project to create a safer, more efficient configuration of the marine terminal’s road network in Newark. Federal funding will help to deliver vital safety upgrades to a major connector that is essential to local and regional commerce.

“This important national investment in our roadway infrastructure has a broad impact far beyond the port, as millions of consumers and thousands of livelihoods depend on the safety and efficiency of its operations,” said Port Authority Chairman Kevin O’Toole. “Shoring up the roads that lead to and from Port Newark ensures that critical supplies, goods and commerce can keep moving throughout the region.”

“This INFRA grant advances the Port Authority’s commitment to modernizing legacy infrastructure while making our facilities safer and more efficient as we keep the region moving,” said Port Authority Executive Director Rick Cotton. “We thank the Biden administration’s recognition of our seaport’s critical role in the national and regional supply chain with an investment in our port roadway infrastructure that will yield safer and more efficient access to Port Newark and Newark Airport.”

“This project is going to alleviate traffic, reduce greenhouse gas emissions, improve air quality for surrounding communities, and help us move more goods in and out of the port complex more efficiently. And there’s no question about this project’s significance to the region and the nation at large,” said U.S. Sen. Bob Menendez of New Jersey. “This project is good for the port, good for the planet, and good for the people. It doesn’t get better than that.”

“These federal grant dollars will help the Port Authority of New York and New Jersey increase efficiency, enhance the movement of goods, and improve air quality at the largest port on the East Coast,” said U.S. Sen. Cory Booker of New Jersey. “As the Port of New York and New Jersey continues to thrive as an economic engine for our region and our country, we must ensure that federal resources are dedicated to supporting that growth and improving the quality of life for nearby residents and communities. This grant award demonstrates that when we choose to invest in improving our nation’s infrastructure, we invest in our workforce, in our economy, and in our country’s competitiveness.”

The goals of the Port Street Corridor Improvement Project are included in the Port Master Plan 2050, a 30-year comprehensive roadmap of proposed seaport-specific capital projects and capacity improvements for the Port of New York and New Jersey, which is owned and operated by the Port Authority.

A key aspect of the project is the creation of a safer northern access point to Port Newark, a 930-acre complex of container, bulk and auto terminals, roadways, warehouses and wharves, that expands across the Newark waterfront. The existing northern entrance is used by approximately 3,600 vehicles per peak hour, 40 percent of which are trucks serving the port complex.

Improving this critical access point would benefit port stakeholders including importers, exporters, the trucking industry and other members of the local, regional and national supply chain, and benefit tens of millions of consumers who rely on the goods, food and supplies that come through the seaport.

Once completed, the project would eliminate more than 700,000 hours of travel time for vehicles accessing the northern entrance of Port Newark in its first full year and cut vehicular accidents and fatalities by 37 percent. In the period from 2005 to 2018, the area saw 401 accidents, including 81 injuries and three deaths, primarily due to the substandard geometric features of the existing roadway and ramp infrastructure.

The Port Street Corridor Improvement Project aims to eliminate these substandard conditions, with the most significant enhancements planned for the interchange of Port and Corbin streets that links the seaport with several major New Jersey roadways such as Interstate 78 and the New Jersey Turnpike. It also serves nearby Newark Liberty International Airport.

The Port Authority’s INFRA grant application for this project was supported by myriad stakeholders ranging from members of New Jersey’s congressional delegation, local and state elected officials and key partners. Their interest is in sustaining the port’s ability to remain operational, efficient and capable of meeting anticipated growth in cargo volume due to strong global trade and the rise of e-commerce that has been exacerbated by the COVID-19 pandemic.

“This grant will continue to improve Port Newark and increase the economic activity of the entire community,” said U.S. Rep. Donald M. Payne Jr.  “In Congress, we are working to make sure we modernize and upgrade all our ports nationwide.  President Biden has shown great leadership in his support of these upgrades.  I know that an improved Port Newark will lead to more jobs and economic prosperity for families throughout my 10th Congressional District.”

“I’m excited for the opportunity this project presents New Jersey, the region and our entire nation’s economy,” said U.S. Rep. Bonnie Watson Coleman, a member of the House Appropriations Committee. “This project will improve safety and efficiency in what is the largest port complex on the East Coast. Our country has put off infrastructure improvements for far too long. Necessary work like this project will help secure our economic future while easing the environmental impact of the port’s activity. I look forward to this project getting underway and thank the Port Authority for their commitment to intentional access and opportunities for minority, women, disabled and veteran owned businesses and workers.”

“Port Newark is critical to the economy of the region,” said U.S. Rep. Albio Sires. “This grant funding is an important investment in modernizing the port and its surrounding infrastructure for the 21st century. I want to thank the Biden administration for recognizing the importance of Port Newark and working with us to get this done.”

“As our nation, our state, our county, and our city recover from the COVID-19 pandemic that plagued us for the last 17 months, investments like this one will help our city’s economic vitality and recovery efforts,” said Newark Mayor Ras J. Baraka. “Today’s announcement and the $44 million investment by the Biden-Harris administration into the City of Newark and the Port Street Corridor project will accelerate the necessary improvements to our roadways and infrastructure. The Port of New York and New Jersey is the gateway to one of the most concentrated consumer markets in North America and the largest port on the East Coast. Our ability to get goods into the hands of consumers quickly gives us our competitive edge. So, any investment including this INRFA grant will enhance our port operations, bring jobs to our Newark residents, and advance our economic recovery efforts.”

“The Bi-State has strongly supported Port Authority’s Port Street Corridor Improvement project for many years now, and we’re excited to that the proposed upgrades will be coming to fruition,” said Lisa Yakomin, president of the Association of Bi-State Motor Carriers. “Once completed, these infrastructure improvements will decrease congestion and increase overall safety on the roadways in and around the port, promoting the efficient flow of cargo. This will benefit everyone in the region, including the millions of consumers who rely on the food, medicine, goods and supplies that our truckers transport each day.”