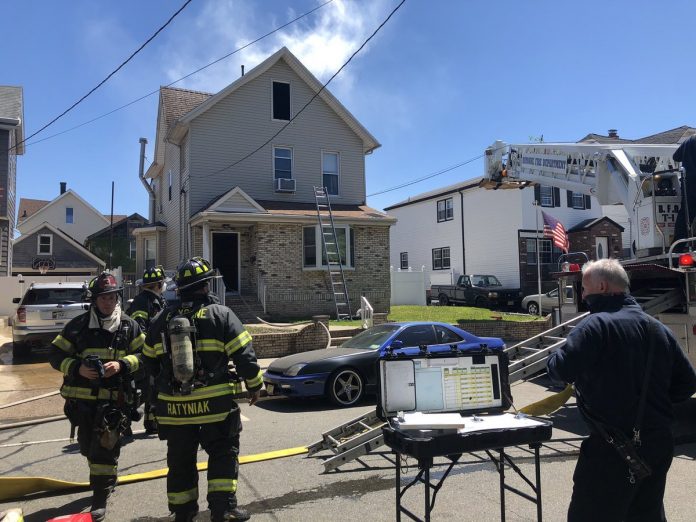 Six Bayonne residents have been displaced as a result of a two-alarm fire which broke out around noon this afternoon at 42 Trask Avenue.  Bayonne Fire Chief Keith Weaver release the following statement after firefighters successfully prevent the flames from spreading to neighboring houses:

“Today at 12:03 pm, the Bayonne Fire Department responded to 42 Trask Avenue for a reported fire on the rear deck of a house. Arriving firefighters found a heavy fire and smoke condition on the third floor rear of the building. Companies stretched 3 hose lines to extinguish the fire and prevent it from spreading to nearby homes. The heavy fire and smoke condition was caused by a propane tank on the rear deck, which added fuel to the fire.”
Chief Weaver went on to say, “The fire was placed under control at 12:50 hours. One civilian suffered a minor injury at the scene and was treated by EMS. A total of six people are displaced from the home until repairs can be completed. Four of the displaced residents are under the care of the Bayonne Office of Emergency Management and the Red Cross.”
An investigation has determined that the cause of this afternoon’s fire is accidental in nature.