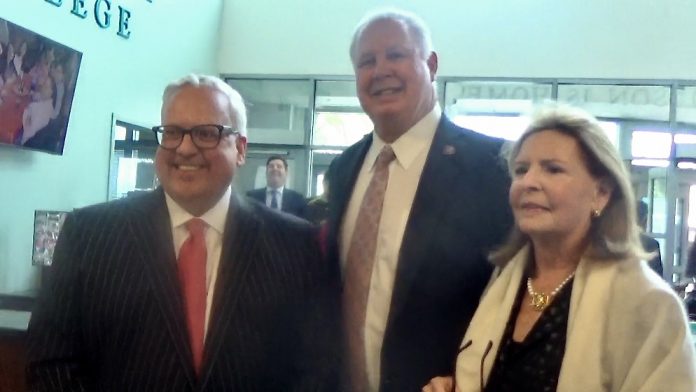 “It’s an honor, obviously — unexpected,” Sires says he worked very hard to get money for the county college. “Not just this one, but throughout the state and I’m still doing that in Congress. So I’m very happy to have been a part of this, the way things worked out.”

The North Hudson Campus commemorated a decade of opportunity at the Kennedy Boulevard location… for those in this community and they had an ally all the way.

According to college president Christopher Reber, Ph.D — HCCC is a place that has been life-changing and transformational for people of this region, thousands of students had life-changing opportunity here.

“This campus, as well as our college has only been able to do it’s work with the support of people like Congressman Albio Sires,” Reber says.

The chairman of the board calls it an incredible facility the day they opened it and the congressman, an incredible guy well deserving of the facility being named after him.

Look at all the kids that are going through here that benefit from making the county college be at the table. And today county colleges are just as important as state schools.

She’s from Allentown, PA but Jenny moved to the area for a change and couldn’t be happier.   “I wanted to get the opportunity to get more diversity, get more inclusion in the city,” Martinez says.

The congressman’s commitment to the college is immense and it’s opened doors for so many people.

“It means everything. When people who can make a difference step forward and sometimes do the hard work and the not always fully appreciated work of making something big like this happen; it’s inspirational,” says Reber.

According to the congressman, if you come through here — at least you get in your two years, then you can make a decision when it comes to a state school and finishing your degree there.

“The degree is what’s important; I would not be standing here if I had not gotten a scholarship to go to St. Peter’s College,” Sires says.

“It inspires others and certainly his example and those of other community leaders and elected officials who, for almost 50 years now — have made it possible for Hudson County Community College to be, to grow,” says Reber.

They have a special place in the congressman’s heart.

“Along the way, county colleges have always been special to me,” Sires says.

It’s an exciting day and an exciting time for Jenny, who’s studying biology and wants to go into pre-med.

“Yes, and I’m happy to be here and I hope to show everyone what Hudson (CCC) is really about and the inclusion that we bring and diversity,” says Martinez.

County community colleges have a lot to offer.

“The teachers that care about the students that come through there and advise them,” the congressman says. “I always say this, even when we were building schools in West New York… there’s no reason why our children in this county should have anything less than what everybody else has.”

The congressman loves Hudson County and there’s so much more to the school.

“Not just our students, it’s our alumni’s family; it’s the work they do in their communities. It’s like a stone rippling in a pond,” Reber says.

“Especially me coming from Penn State — I know how big the schools can be and how lost students can feel,” says Martinez. “So having Hudson (CCC); it’s really nice.”

When he was assembly speaker he obtained lots of dollars for the college, resulting in the culinary institute they have in Journal Square.

“Getting it started up here,” — when he was mayor he was a friend and once he got to Congress he’s continued to help us,” Netchert says he’s a partner.