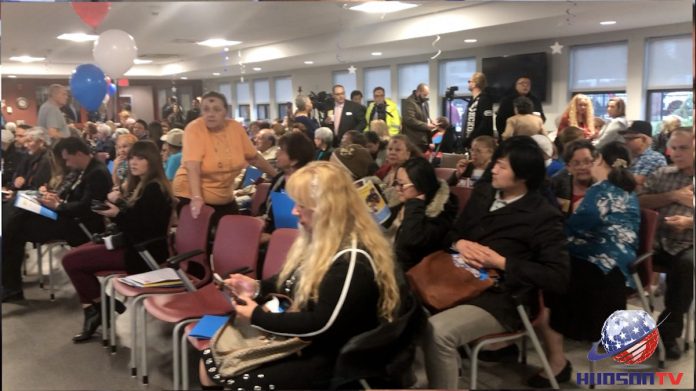 They always put North Bergen residents first and that was definitely the case when State Sen. and Mayor Nicholas Sacco, in conjunction with the offices of Sen. Robert Menendez, the New Jersey Secretary of State, and the County of Hudson hosted a forum on immigration and the 2020 census.

“I’m here today to support the people for immigration. In this building a lot of Spanish people — I’m proud to be here and I’m proud to be an American,” says North Bergen resident, Maria Quintanilla.

“You may need to share with those that are in need to come out of the dark into the light,” says Kerlyn Espinal, director of Immigration Services.  “And as our State Sen. Nicholas Sacco said, ‘Actually I am privileged to be here today representing United States Senator Robert Menendez (who she stated was not present because he was in Washington advocating for all of us).

“The Census every 10 years tells us how much aid North Bergen is gonna get,” Sacco says.  “There’s a terrible, terrible situation where people are not counted during this period.  And when that happens, we lose money, we lose aid.”

And the mayor says that the Housing Authority won’t be served as well as it should be.

“That’s our job, to go out to make sure everyone fills in the census, respond to the questionnaire and gets counted,” the mayor says.

Menendez has worked closely with the Administration to support new immigration policies that promote fairness, accountability and family unity.

“I’m blessed that he came over to North Bergen to promote this and remind people of the importance,” says Asw. Angelica Jimenez (D-32). “Everybody in this community is very fond of him.  We have a huge bilingual community, Spanish especially.

“There’s different platforms here, they’re gonna have the REAL ID. The office I’m representing in the County of Hudson is the Office of Consumer Protection. “

The mayor and senator are providing a lot of information about new programs that they can all benefit from — that is, a lot of the people in North Bergen.

Tell me how concerned are you about immigration and the census.

When it comes to the Real ID, you may already have what you need; including a permanent resident Green Card, US Military ID or US Passport.

“The Real ID is a federal mandate, which is basically gonna require people to have the Real ID to board an airplane, starting Oct. 1, 2020,” says Wanda Silva, NJMVC director of Media Operations.

The Census Bureau plans to engage, educate and ultimately count an increasingly diverse and growing population.

“Currently we have the census that we’re gonna be starting that initiative. So for the senator to be starting this and for the mayor to invite the senator over to North Bergen; it’s an incredible idea,” Jimenez says.

So by  calling them together it’s sending a message that they are going to be counted to a person in North Bergen.

“Doesn’t matter if they’re undocumented or what level they fall — if they have Green cards; if they’re citizens. No matter who they are, they have to be counted,” Sacco says.

According to the Assemblywoman, it’s really important for our community to be aware of the immigration scams that are out there.

“The importance of the census and not to be afraid when somebody comes knocking at your door,” Jimenez says.

If they’re living in an apartment that’s not legal, they still have to be counted because the amount of aid that North Bergen gets depends upon it.

“Going through our recreation department when children register for different activities, sports activities we give them forms, census forms and help them fill them out,” the mayor says. “So we’re reaching out in all different directions to get our people counted.”

“They’re welcome, but they have to obey the law and it’s too crowded, too much crime,” says North Bergen resident Roman.  “Because they come over the border, the criminals and we can’t allow that in our country — it’s really gonna ruin our country. “And I’m afraid to go out at night. I don’t go out at night anymore.”