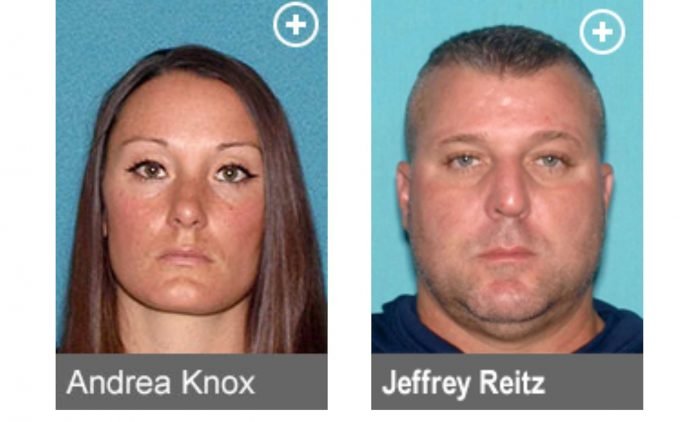 TRENTON – A New Jersey state trooper was arrested on charges that she received images of child pornography from a second trooper during sexually explicit text exchanges with him in 2018 and failed to report the conduct to police.

Andrea V. Knox, 35, of Mt. Holly, N.J., was arrested on charges of official misconduct (2nd degree) and possession of child pornography (3rd degree). Knox, who is assigned to Troop D Moorestown Station, was released after a first court appearance. She has been suspended by the New Jersey State Police.

The charges relate to texts that Knox allegedly exchanged with Jeffrey Reitz, 48, of Williamstown, N.J. Reitz was arrested today on a charge of distribution of child pornography (2nd degree). Reitz was previously indicted on Dec. 19, 2019 on two counts of possession of child pornography (3rd degree) in a separate case related to text exchanges with a different woman. During those exchanges, the woman proposed that Reitz sexually assault a young girl and sent him a sexually explicit photo of the girl.  Additional images of child pornography were found in an iCloud account that belonged to Reitz.

For more details on the indictment of Reitz: https://www.nj.gov/oag/newsreleases19/pr20191219c.html

Further investigation of that iCloud account revealed that Reitz allegedly engaged in sexually explicit conversations about an underage girl with his fellow trooper Knox. On Aug. 27,  2018, Knox allegedly encouraged Reitz by asking for details about the sex acts Reitz would like to perform on the girl. The following day, the pair had another sexually explicit text exchange, during which Reitz sent Knox photos of people at a nudist location, including two female children who were both naked with their genitals visible.  Knox failed to report that Reitz shared items of child pornography with her, despite her duty as a police officer to enforce and uphold the laws of the State of New Jersey.

Knox and Reitz were charged in investigations by the Division of Criminal Justice Financial & Cyber Crimes Bureau. Deputy Attorney General Rachael Weeks is prosecuting the cases.

damn thats wack as fuck...i might have to pull that move tho...my license bout to expire wtf smh

That blonde chick was all over this protest. Terrible

GET THE FUCK OUT IF NYC! Dam fascists!!