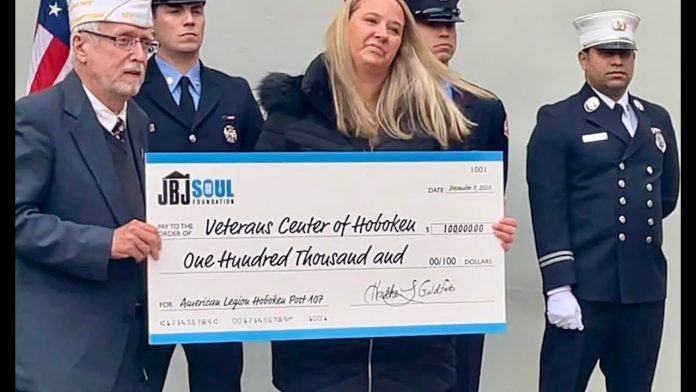 Those who honorably served our country and defended our freedom deserve a roof over their heads and to live with dignity. The Hoboken American Legion Post 107 is making sure that happens.

They broke ground at 308 2nd Ave., receiving $225,100 to expand their Veterans Center, that currently houses six vets and next summer will have room for 18 more.

Many at the podium reflected on the 80th anniversary of Pearl Harbor, and just how much this expansion means to our homeless vets.

“These veterans came into these apartments with the clothes on their back,” says Commander John Carey. “They had everything from a toothbrush to a microwave and that’s what they deserve. We should never have a homeless veteran.  The word homeless should never be used with veterans.”

According to Fifth Ward Councilman Phil Cohen, he spent eight years on Hoboken’s zoning board and they saw many projects come and go.

“This is the one that I’m aware of where there is complete 100 percent support,” says Cohen, who spoke on Mayor Ravi Bhalla’s behalf.

Reasons for veterans being homeless could be any number of things.

They are also looking at properties in Middlesex, Union and Essex counties, and using Hoboken Post 107 as a model.

It’s that crucial, considering 22 veterans take their own lives daily — and a lot of that is associated with homelessness.

“One a day is too many, we need to figure out a way to make sure we’re taking care of our men and women. We’re gonna be right in the middle of this battle to make sure our heroes get the help that they’ve earned.”

If you see a veteran thank them for their service.

“Talk to them, just say hello — start a conversation. You might actually be doing more than you realize to help them out.”

The people of Hoboken love this project.

“They think it’s important; they think it’s valuable,” Cohen says. “The neighbors want to have it here. These heroes deserve a place to live.”

The land is owned by the city.

“And Mayor Bhalla’s administration, the City Council have been together united, completely making sure in their many possible uses of city land that this land should be for America’s heroes,” says Cohen.

Anytime they brought up this project before the freeholder board or discussions at the county level, everyone was in agreement, adds County Executive Tom DeGise.

Projects like this are made possible through partnerships, relationships and something board chairman, Jon Bon Jovi calls the ‘power of we.’

“We are so proud to be partners on this new housing project that will not only create a space for veterans but also deliver important and life-saving services,” said JBJ Soul Foundation Executive Director Heather Goldfarb, who presented a $100,000 check.

“Keep up the great work, to all of our veterans: you are loved and appreciated,” stated Hoboken Grace Church Pastor Chris High.

At Hoboken Grace Church they don’t ‘just live here, they love here.’ So they wanted to find a space where they could love better.

“We wanted to help people find home,” says Pastor Chris High. “To make sure our veterans had a home inside our city. So we’d like to give you a check for $100,000.”

And he made sure to give a shout-out to all our veterans — “you are loved and appreciated.”

Legion members also gave $25,100 and there was an undisclosed sum from The Sudler Foundation.

We leave no veteran behind.

“We feel strongly that no veterans after serving our nation proudly and all their sacrifices that they should not have a place to lay their head,” says American Legion Department Vice Commander Jack Dunne, who adds that this project has already saved lives.

“This is all about saving lives,” Dunne says. “For us, fulfilling our mission, paying it forward and continuing to serve as volunteers… it doesn’t get better than this.”