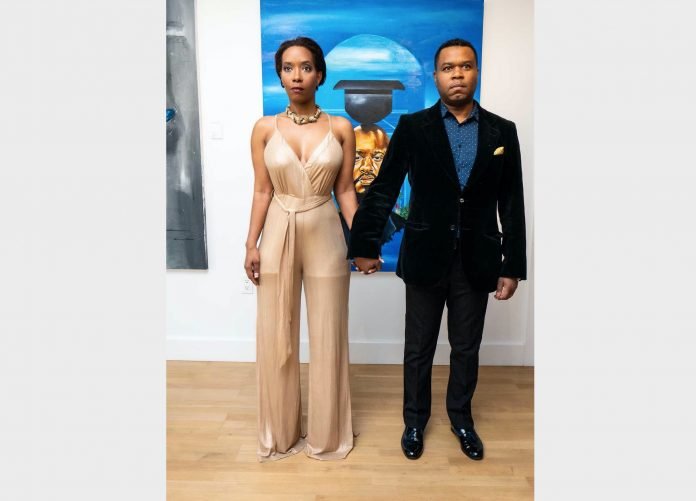 Bayonne, New Jersey – New Jersey Teamsters Football Club (NJTFC) announces its membership acceptance in to the National Independent Soccer Association (NISA), a professional soccer league under the United States Soccer Federation, pending a successful launch and compliance with United States Soccer Federation Pro League Standards.
This month, the team’s owner Sibrena Stowe-Geraldino makes history as the first female African American principal owner of a professional soccer team in the United States, and husband Alexsi Geraldino is the great-grandson of the founder & president of Dominican Republic’s Lotería Nacional (National Lottery) now, Alex is first Dominican American professional soccer club owner in the United States, both major accomplishments during Black history month.
NJTFC was founded in 2017 by the husband and wife duo, as a pro development soccer club based in Bayonne, New Jersey, playing home matches at Don Ahern Veterans Stadium. The team played its first season with UPSL and has consistently ranked Top #5 in their conference. Both the A-squad and B-squad won championship cups under the leadership of coach Javier Romero, a former professional soccer player from Jersey City, New Jersey.
Founder and president Alex Geraldino, a firstgeneration American from Manhattan, NY is a former NFL- European Corner Back, a USA boxing official and registered US Soccer Intermediary. Chief executive officer, Sibrena Stowe-Geraldino hails from Philadelphia and is a 26-year veteran media mogul in the entertainment industry, working with notable recording artists, athletes and high profile personalities.
Sibrena said, “Alex and I are excited to bring professional soccer to Bayonne and grateful to NISA, Mayor Jimmy Davis, the City of Bayonne and Hudson County for believing in us. We’re thankful to NISA’s Board of Governors for voting us in and we’re looking forward to meeting our milestones set in place by the league. The league shares our core values and we all are change agents in American soccer who believe in the spirit of excellence, integrity and inclusion. Our region has a tremendous amount of talent and we are looking forward to providing players with the opportunity to try out and play professional soccer!”
Starting in March 2020, NJTFC will hold a series of tryouts and will play friendlies and scrimmages in preparation for the inaugural season in 2021.
The National Independent Soccer Association (NISA) is a US men’s professional soccer league and Pro League Member of US Soccer Federation. NISA believes in a sustainable and affordable model of professional soccer where club owners own their clubs and intellectual property as well as control the league and its governance. NISA believes in the open system and strives to reflect the global vision of the sport.
“On behalf of the Board of Governors, I am proud to welcome the New Jersey Teamsters Football Club to NISA,” said John Prutch, Commissioner of NISA, “Sibrena and Alex bring tremendous talent and energy to the league and I look forward to their contributions on the pitch as well as in the Boardroom.”

New Jersey Teamsters Football Club’s mission is to become an open and multicultural club, respected in the US and around the world for its achievements in sports and its values which coincides with the club operating with the ‘Spirit of Excellence’ on and off the pitch, and contributing to fulfilling the expectations of its supporters. FOR PRESS INQUIRES CONTACT: Marketing@NJTeamstersFC.com