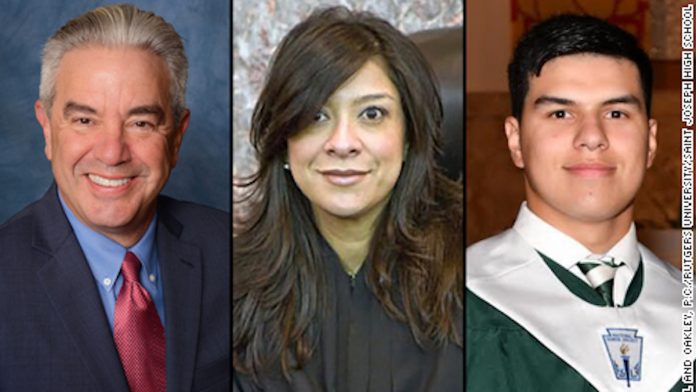 Numerous media outlets are reporting this afternoon that the gunman who shot and killed the son of a Federal District Court Judge, and critically injured her husband on Sunday in North Brunswick, has been found dead of a self-inflicted gunshot wound in a rural, New York town approximately two hours north of the New Jersey-New York border.

The 20-year old son of Judge Esther Salas, Daniel, was shot dead of multiple gunshots at the home of his parents on Sunday afternoon at approximately 5 o’clock.  Daniel’s father and Judge Salas’ husband, criminal defense attorney Mark Anderl, was listed in critical, but stable condition on Monday afternoon at undergoing surgery.

The shooter, believed to be an attorney, was found dead at the intersection of Berry Brook Road and Campsite Road in Rockland, New York, near Liberty, New York.  The body had a self-inflicted gunshot wound.  Authorities believe Judge Salas’ husband was the intended target of the shooter.

Judge Salas is the first Latina to serve on the US District Court in New Jersey.  She was not injured in the attack, having reportedly been in her home at the time of the shooting.

Police say the gunman was dressed as a FedEx employee and was wearing a face covering.  When Anderl opened the front door, he was immediately shot.  The son then suffered multiple gunshot wounds, killing him.

Police say no Federal Express truck was involved in this tragic incident.  The shooter escaped in a car.

The investigation is continuing, led by the FBI, with assistance being provided by New York State Police, the North Brunswick Township Police Department and the Middlesex County Prosecutor’s Office.

Judge Salas has reportedly received threats in the past.  She is now under 24-hour protection from the US Marshal’s Office.