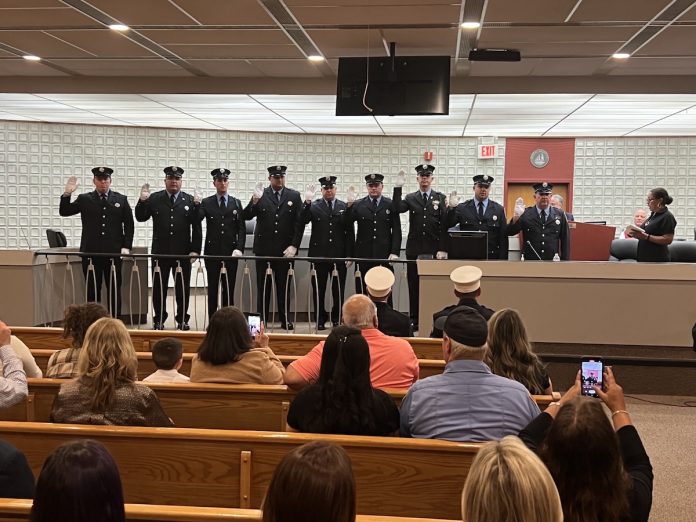 The new battalion chiefs are John Andreychak and Thomas Obiedzinski. 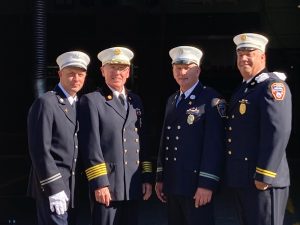 Speaking at the start of the ceremony, Mayor Jimmy Davis said to the new fire captains that their promotion is “the first step moving up the ladder.”  He said it would be the captains’ responsibility to teach the younger firefighters.  Addressing the new battalion chiefs, Mayor Davis said that they are “stepping up” to a rank with greater responsibilities.  He referred to Bayonne’s emergency services as “a great Fire Department,”  “a great Police Department,” and an ambulance service that is “one of the best in the state.”  Mayor Davis said that his job is to make sure that the emergency services “have everything they need,” and to make sure that “they get home to their families.”

Public Safety Director Robert Kubert said that the promoted fire superior officers “have excelled out on the street” and on their competitive tests.  He observed that they “have demonstrated themselves as leaders in the Fire Department.”  He explained that they would be training new firefighters to replace recent retirees.  Director Kubert said that all of Bayonne’s emergency services “have had a tough couple of years” during the pandemic, often dealing with infected people.  He referred to the Bayonne Fire Department as “a very service-oriented organization” that performs many duties in addition to firefighting.  The director thanked Mayor Davis and the City Council for their support of personnel and equipment for the Fire Department.

Council Member At-Large Loyad Booker, a former police officer, said that he worked with several off the promoted fire superior officers.  He commended their abilities and thanked their families for their sacrifices.

Council Member At-Large Juan Perez, a former state trooper, congratulated the firefighters for their “well-deserved” promotions and sacrifices of their time.

Fire Chief Keith Weaver thanked Mayor Davis, the Council Members, and Director Kubert for supporting the promotions.  Chief Weaver said, “This Administration is an ardent supporter of the Fire Department.  Referring to the new battalion chiefs, Chief Weaver said that they competed with “the most qualified in the department during the testing process.” He cited their careers of more than twenty-five years in the department.  Chief Weaver said that the new captains were also “very competitive” with their exam preparation classes, books, and sacrifices.  Speaking from experience, Chief Weaver said that the promoted firefighters would have to make “split-second decisions during emergencies.”  He predicted that they would have the “knowledge, fairness, and ability to make sound decisions” and “to effect change for the better.”

At the ceremony, the Police Pipes and Drums provided the music.  The Fire Department Honor Guard commenced the ceremony and led the Pledge of Allegiance to the Flag.  Deputy Chief William Bartos, Battalion Chief Robert Seeburger, and Battalion Chief Frank Pawlowski, Jr. read out the biographies of the promoted firefighters.  Former Fire Chief Patrick Boyle read the biography of his son, Captain Sean Boyle.  City Clerk Madelene Medina administered most of the oaths of office for the new battalion chiefs and captains. Battalion Chief Andreychak’s oath was administered by his sister, Ann Marie McCarthy. The invocation was offered by Rev. John Fencik of St. Mary’s Orthodox Church.  The final prayer was offered by Rev. Dorothy Patterson of the Wallace Temple AME Zion Church.