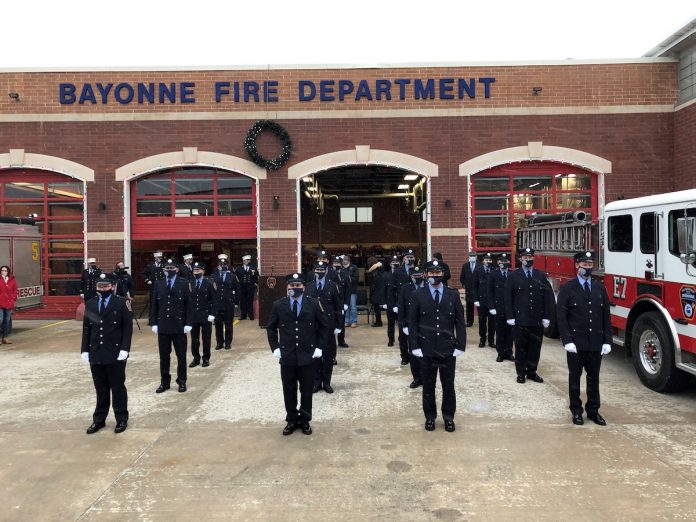 On Wednesday, December 16, the Bayonne Fire Department held an induction ceremony for sixteen new firefighters.  In the Fire Department’s history, it was the first class of new recruits with two women.  The first of Bayonne’s female firefighters, Cailin Brodel, was promoted to Captain on the same day at a separate event, along with Raccys Pozo, the department’s first Cuban-American Captain.

The ceremony for the new firefighters took place at the Peninsula Fire House at the former Military Ocean Terminal.

Speaking at the ceremony, Fire Chief Keith Weaver said that a ceremony for new firefighters is “always a great day.”  He stressed that becoming a firefighter “is no easy task,” because candidates for the job are “testing against hundreds of others” on the Civil Service examination.  Chief Weaver urged the new recruits to “continue to learn every day.”  He observed that they have “an opportunity to make a difference in our community.”

Mayor Jimmy Davis said that the new firefighters would “forever remember” their ceremony, which took place outside in the snow, due to the Coronavirus.  He thanked them for their “dedication,” and said that they are now “professional firefighters.”

City Council President Sharon Ashe-Nadrowski said to the new recruits, “We are lucky to have you.”  She said that they have joined a fire department that is “second to none.”

Here are brief biographies of the new firefighters:

Firefighter Joseph Coughlin is the son of Darlene and Joseph Coughlin.  His father is a retired Deputy Fire Chief with the Bayonne Fire Department.  Firefighter Coughlin was homeschooled.  He worked previously as a plumber’s assistant.

Firefighter Anthony Duran is the son of Karen and Eugene Duran.  He is a graduate of St. Peter’s Prep and Wake Forest University, where he majored in Politics and International Affairs and minored in Economics.  He was employed formerly at BCB Community Bank.

Firefighter Kyle Martinez is the son of Carmella Laudando and Manny Martinez.  He is the cousin of Hector Rodriguez, a Bayonne Police Officer. Firefighter Martinez is a graduate of Bayonne High School. He graduated from Rutgers University, where he majored in Economics and Political Science.  He was employed formerly as a substitute teacher by the Bayonne Board of Education.

Firefighter Joseph Smith is the son of Roberta and Joseph Smith.  He is the brother of Fire Captain Michael Smith of the Bayonne Fire Department.  He is married to Crystie Smith, and they are the parents of two children.  Firefighter Smith is a graduate of Bayonne High School.  He worked previously as a facility technician for Verizon.

Firefighter Michael Lojewski is the son of Janet and Michael Lojewski.  He is the grandson of John Brown, a Bayonne Fire Department Captain, and the nephew of David Brown, a retired Bayonne Fire Department Captain.  He is a graduate of Bayonne High School.  Firefighter Lojewski is studying currently at the College of New Jersey, where he is majoring in Criminology.

Firefighter Dylan Wasielewski is the son of Allison and Hank Wasielewski.  He is a graduate of Bayonne High School.  He is studying currently at Hudson County Community College, where he is majoring in Exercise Science.  Firefighter Wasielewski is a veteran of the U.S. Army.  In the military, he worked in Intelligence.

Firefighter Nicholas Leyva is the son of Ann Marie and Angel Leyva.  He is engaged to Lauren Tredo.  He is a graduate of Bayonne High School and Kean University, where he majored in Public Administration.  He worked previously as a conductor with the East Jersey Railroad.

Firefighter Joseph Bunin is the son of Rosina and Alan Bunin.  He is the brother of Jerome Bunin, a Bayonne Police Officer.  He is a graduate of Bayonne High School.  Firefighter Bunin was employed formerly as a chemical operator at IMTT.

Firefighter Brian Olsen is the son of Lisa and Russell Olsen.  He is engaged to Bridget Sullivan.  He is a graduate of South River High School and New Jersey City University, where he majored in Fire Science.  He worked previously as a Firefighter with the Monroe Township Fire District 3.

Firefighter Tyler Hubeny is the son of Cynthia Hubeny Joyce and Lance Hubeny.  He is a graduate of Mater Dei Prep.  He was employed previously as an EMT for Oakhurst EMS in Ocean Township.

Firefighter Maria Del Carmen Guzman is the daughter of Leila Guzman.  She is the mother of Havana.  She attended Ferris High School and Hudson County Community College, from which she graduated with a degree in Biology.  Firefighter Guzman was employed formerly as a swim coach at SkyClub Fitness and as a volunteer EMT for Hoboken EMS.

Firefighter Brandon Kuhl is the son of Leslie and Glenn Kuhl.  He is a graduate of Bayonne High School.  He attended New Jersey City University for three years, majoring in Criminal Justice, with a minor in Fire Science.

Firefighter Dean Raslowsky is the son of Denise and Daniel Raslowsky. He is the brother of Drew Raslowsky, a Bayonne Police Sergeant.  He is engaged to Martha Brenes.  He is a graduate of Bayonne High School. He was employed previously in the building trades with Ironworkers’ Local 11 and in the maritime trades as a crane mechanic with International Longshoremen’s Association Local 1804-1.

Firefighter Michael Troglio is the son of Teresa and Robert Troglio.  He is a graduate of St. Peter’s Prep and Rutgers University, where he majored in Human Resource Management.  He was employed previously by the Bayonne Police Department as a Police Officer.

Firefighter Olivia Whitney is the daughter of Deborah and Michael Whitney.  Her father is a retired Captain of the Bayonne Fire Department.  She is a graduate of Bayonne High School and Montclair State University, where she graduated with a major in Mathematics and a minor in Economics.  Firefighter Whitney worked previously for Statue Cruises.   Wednesday,