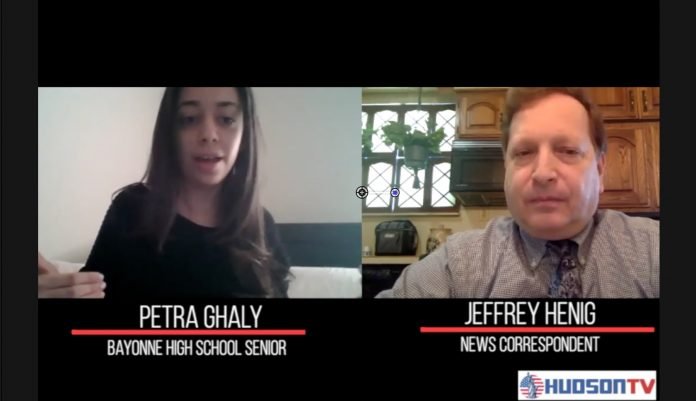 Bayonne High School senior Petra Ghaly, the elected Student Council representative on the city’s Board of Education, who openly supports the Republican Party, has lived in fear since she received death threats last June on social media from several students at the high school, but were most severe by one student.  Ghaly spoke with Hudson TV reporter Jeff Henig, to outline in detail, what happened last year and the response, she says, has not been appropriate by the Board of Education.

After Hudson TV emailed Superintendent of Schools John Niesz, Board of Education President Maria Valado and Bayonne High School Principal Richard Baccarella seeking comment on the situation, we were informed by the Superintendent that, “The school district cannot comment on matters dealing with individual student(s) and student(s) discipline.”

After Ghaly overwhelmingly won the election, she started receiving death threats.  Under New Jersey law, political affiliation is not protected from being discriminated against.  Ghaly goes into detail during the interview about this issue and the difference between threats being made on a personal device versus a school Chrome device, and why the high school’s Tech Department said there was nothing it could do regarding the matter.

We just called. A man working in the tech department picked up and then we explained the issue and he said he would talk to the Director of Technology and put us on hold and then the call ended. Then we called again, and she picked up and stated, “Um, so, okay, so um, the supervisor of security for the Bayonne Board of Ed, his name is Tim Carey (Timothy Carey), Tim Carey is going to reach out to you because he has been trying to look into um the threat that happened on Twitter, (i tried cutting her off here and said “Wait hang on a minute the threat was not made on Twitter” but she kept talking over me) unfortunately it is not a Bayonne Board email it is not a Bayonne Board of Ed service.” I cut her off again and said “Hang on, the threat wasn’t made on Twitter, are you even aware of what happened? Did someone ask you to investigate this because it didn’t happen on Twitter.” She replied saying, “Oh. Okay. Can you explain to me what happened?” I said “Well this happened 9 months ago, so you’re telling me that for 9 months they’ve been trying to investigate a threat on twitter that didn’t happen on twitter? Were you even informed of this?” She said, “Um security has been handling it.”  I asked “What do you mean handling it? It was 9 months ago ma’am.”  She basically said it wasn’t the tech department’s jurisdiction because they can’t investigate anything that is not on a school email, device, BBOED service and that she ran a check on school emails and couldn’t find anything. Tim Carey has never contacted me in the 9 months that he was allegedly investigating this incident. I asked for his District number to have a conversation with him and she refused to give it to me telling me he will reach out himself.

Bayonne Board of Education Representative

When Ghaly approached the Board of Education with the information about the death threats last summer, the district should have initiated what is called a HIB investigation within ten days.  HIB stands for Harassment, Intimidation and Bullying investigation.  That did not happen.  Now Ghaly says the district, in the past few weeks, has been trying to get her to agree to the HIB investigation.  She has refused and she elaborates why during the interview, including the fact that her family has consulted with an attorney with 25 years of HIB expertise.

Ghaly went to the Bayonne Police Department last summer, which investigated the entire matter, and ultimately the death threats from the students stopped.  But the story doesn’t end there.

Ghaly believes there is a loophole in the law where students are not protected from political retaliation.  She approached the Board, asking if she, as an individual and not as the Student Board representative, could have a time extension when addressing the Board Trustees at a public meeting, from the allowed three minutes, to ten minutes.  She was denied and she openly talks about this as well.

Ghaly wanted the issue aired in public, in front of parents, teachers and fellow students, and not addressed behind closed doors with the Superintendent and Board Trustees.  She was asking for complete transparency.

So, the question remains, why did the Bayonne Board of Education not begin an HIB investigation, as they are legally required to do in the State of New Jersey, within ten days of being informed of a given situation?  That’s something not only Petra Ghaly, but every parent in the district, should want an answer to from their elected Board of Education and Superintendent of Schools.