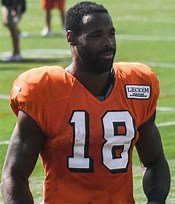 Kenny Britt, a former Bayonne High School football star, who attended Rutgers University and played for several teams in the NFL, was arrested by Bayonne Police on Saturday afternoon.

According to Lt. Eric Amato, the 31-year old Britt was pulled over by police while driving a 2019 black-colored Rambler truck at approximately 3:13 pm.  He was stopped in the vicinity of Kennedy Boulevard and 33rd Street.

The report says police immediately detected the smell of raw marijuana when approaching Britt’s vehicle.  When the truck was searched, a small amount of marijuana  amounting to less than 50 grams was found.

In addition to charging Britt with marijuana possession, he received two motor vehicle summonses.  Britt was processed and released.

Britt, who lives in Nashville, Tennessee, has had previous run-ins with law enforcement, including an arrest in 2011 for attempting to elude Bayonne Police while driving 70 mph on a local street.

Britt, who currently is an NFL free agent, is a wide receiver who was drafted with the 30th overall pick in 2009 by the Tennessee Titans after playing for the Scarlet Knights. He has also seen action for the St. Louis/Los Angeles Rams, Cleveland Browns and New England Patriots.