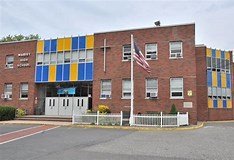 Dwindling enrollment and mounting, annual financial losses will result in the closure of Bayonne’s Marist High School this coming June.  According the nj.com, the school’s administration made the announcement on Wednesday. Marist is one of Hudson County last remaining, Catholic high schools.

According to a statement made by school President Peter Kane, Marist loses more than $1 million annually.  Its enrollment currently stands at 235 students, a drop of 20 percent over the past four years and 50 percent of what it was a decade ago.  Kane added that students who are not part of the 2020 graduating class will be given personal advice on their options for the ’20-’21 academic year.

Marist’s student enrollment is made up of approximately 20 percent Bayonne residents with nearly half living in Jersey City.  While this year’s freshman class is the high school’s largest in five years totaling 75 students, only 59 seniors are expected to graduate in June.  Last year the graduating class consisted of 85 students.

Marist nearly shut down three years ago, but the school community was able to raise three-quarters of a million dollars, enabling it to remain open.

Every billionaire and millionaire has tax accounts that follow every tax law. The problem is the Trump or the wealthy, it’s the tax laws. Democrats have been in office a lot longer than the President. You want to blame someone, blame the stupid democrats. Lastly, you tax the crap of billionaires and millionaires, they take their money somewhere else. Ask stupid Governor Cuomo. He’s begging for them to come back. He’s inviting them for drinks and he even offered to cook a home cooked meal. You communist democrats are hypocrites. Ask Pelosi, Sanders, etc how politicians became millionaires.

It's all in the tax laws not the people who use them.

Over 2,000 Restaurant-Prepared Meals Served to Soup Kitchen Patrons Across 7 Counties During Second #FeedingFriday This past Friday, local restaurants provided a combined 2,000 meals to soup kitchens across 7 New Jersey counties, to be enjoyed, free of charge. It was the second, monthly #FeedingFrid...
View on Facebook
·Share

The President of the Latino American Democratic Association of New Jersey speaks with Hudson TV reporter Jeff Henig about the importance of the Hispanic vote in the upcoming election, and his views on filling the US Supreme Court vacancy following the death of Justice Ruth Bader Ginsburg. wp.me/p7aSUK-bFX ... See MoreSee Less