Last night, Hudson County’s Division of Engineering hosted a virtual meeting with the North Jersey Transportation Planning Authority on safety improvements being considered for JFK Boulevard East from Park Avenue in Hoboken to the south, to Wall Street in North Bergen at the Bergen County border to the north.  The public session allowed residents to comment on the numerous upgrades now being considered for the county roadway.

The main change in the latest proposal, which stretches four-and-a-half miles through Hoboken, Weehawken, West New York, Guttenberg and North Bergen, is the complete elimination of dedicated bicycle lanes along the heavily travelled roadway atop the Palisades.  The inclusion of bike lanes had apparently been agreed upon a few months ago in discussions between bicycle lane proponents, county engineers and town officials. That has now gone by the wayside, and it’s something which does not sit will with cycling enthusiasts.

According to webinar host Brad Miller and Hudson County Director of Traffic and Transportation Jose Sieira, local Mayors and municipal town councils are not in agreement with the inclusion of the dedicated bike lanes along Blvd. East. 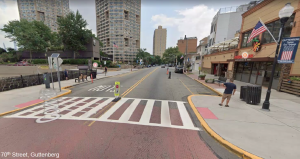 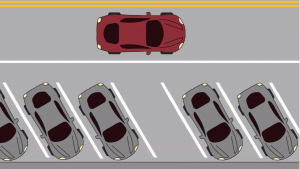 Rather, they support the inclusion of angled parking spaces along certain stretches of the road, as well as curb cutouts at intersections, additional lined crosswalks, new traffic signals, digital, traffic speed signs informing drivers of how fast they are going, plus road surface treatments in various locations, such as the treatment which currently exists just north of the Galaxy Towers in Guttenberg and on the huge turn in North Bergen just to the north of Guttenberg. 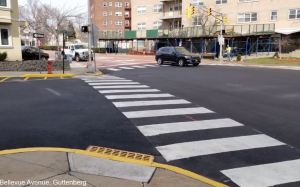 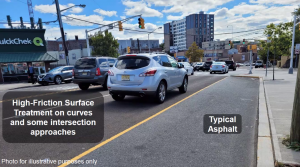 The main objection to the inclusion of bike lanes by the elected officials is that it would eliminate too many street parking spaces.  That’s an argument expressed on numerous occasions by Weehawken Mayor Richard Turner, Hudson County Commission Chairman Anthony Vainieri and County commissioner Caridad Rodriguez, who represents West New York.

Funding for the proposed Boulevard East changes would be paid for by the Federal Highway Administration.