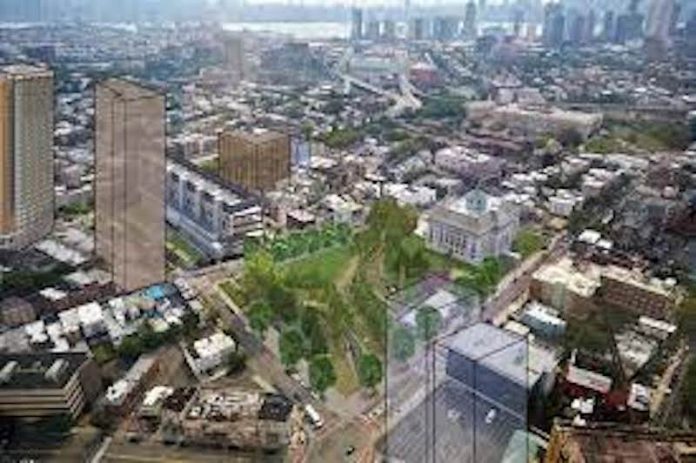 JERSEY CITY – Mayor Steven M. Fulop joins Hudson County Executive Director Tom DeGise and the Courthouse Park Advocacy Group to announce significant strides being made toward developing the three-acre Courthouse Park, the first large public park to be built in Journal Square, as part of the area’s overall renaissance currently underway. As part of the City’s commitment to incorporating community input throughout the design process, the first of several community meetings will be held in-person and online tonight at 7 p.m. inside the County Annex Building located at 567 Pavonia Avenue in Jersey City.

As part of the Fulop Administration’s broader efforts to significantly improve parks and public spaces citywide, the City joined the community over the past 5 years to strongly advocate for the County-owned, 3-acre lot along Newark Avenue to be preserved as open park space for the public to enjoy, especially since there are no other parks in the surrounding area.

From the preservation of the iconic Loew’s Theatre to the upcoming Centre Pompidou x Jersey City, to the recently announced Museum of Jersey City History at Apple Tree House, to the expansion of Hudson County College alongside critical private development, under Mayor Fulop’s leadership, Journal Square will soon serve as the heart of Jersey City once again for generations to come.

When work started on the Hudson County Justice Complex, the County planned to demolish and rebuild 595 Newark Avenue, the Administrative Services Building located behind the historic County Courthouse. After years of negotiations between the Fulop Administration and Hudson County officials, plans are now progressing after an agreement was reached where the City handles the design and build-out for what will become a County park. Earlier this year, Jersey City allocated $15 million to build the park, with community input incorporated throughout the process.

“This is a once-in-a-lifetime opportunity to implement new park infrastructure in one of the most densely-populated cities in the country. Through a community-centered process, we will be prioritizing the needs of the residents who live directly adjacent to the area and have not had easy access to a park for decades, while also advancing a world-class design that is in alignment with our citywide goals of sustainability, resilience, transportation equity, innovation, and smart growth.” concluded Barkha Patel, Director of Jersey City’s Department of Infrastructure.

All community members are invited to attend tonight’s meeting and provide their input on how Courthouse Park can benefit the surrounding neighborhood.  The meeting will be held from 7-8:30 p.m. inside the Hudson County Annex Building located at 567 Pavonia Avenue in Jersey City.  The meeting is also available virtually by clicking here. 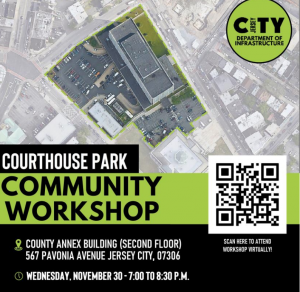