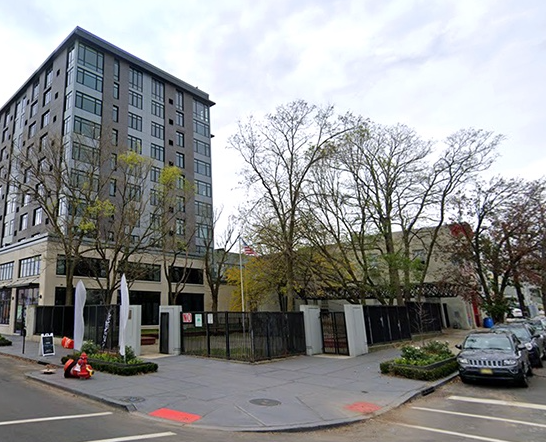 A ceremony took place recently to rededicate Dr. David Morris Park at 47th Street and Broadway in Bayonne.  The event was presented by the Bayonne Youth Center.  The renovated park was named in honor of the late Dr. Morris, who served as leader of the medical staff at Bayonne Hospital and President of the Bayonne Branch of the NAACP.

Speaking at the ceremony, Mayor Jimmy Davis noted that Dr. Morris Park is one of the few in Bayonne that is not named after an elected official.  He said that Dr. Morris “spent his life helping people.”  Mayor Davis called on people to stand together and “celebrate his life.”

City Council President Gary LaPelusa said that he would like children “to emulate Dr. Morris.” He recounted some of the history of the park, where his civic organization donated a flagpole and held a fall festival for thirteen years.  Council President LaPelusa added that he established a Third Ward Christmas tree-lighting ceremony, which takes place in Dr. Morris Park.

Donald Byrd, President of the Bayonne Branch of the NAACP, recalled meeting Dr. Morris in 1968, when the young Donald tried to walk away from an inoculation program.  He recalled that the firm hand of Dr. Morris brought him back into line for his vaccination.

Lisa Glover, a member of the Bayonne Branch of the NAACP, presented a summary of Dr. Morris’s life from his birth in Florida to his medical career and community activism in Bayonne.  She said, “There is much to be proud of.”  Ms. Glover described Dr. Morris as “a mentor and inspiration to many.”

Dr. Morris’s family was represented at the event by his great-niece, Adelyn Oliver, and his great-nephew, Dr. Merwood Jones.  Ms. Oliver described Dr. Morris as “a fun uncle.”  She recalled going to theaters that he helped to integrate.

Andrew M. Spruill, President of the Central New Jersey Chapter of the Lincoln University Alumni, spoke about Dr. Morris as a fellow alumnus of Lincoln, a historically Black university.  Mr. Spruill called Dr. Morris “a great man,” “a great leader,” and “a force multiplier of social change.”  He recalled that Dr. Morris attended Lincoln University a mere fifty years after the end of slavery.

Bruce Morgan, First Vice President of the New Jersey State Conference of the NAACP, worked on Constable Hook in Bayonne in his earlier years.  He reminded the audience that former New York City Mayor David Dinkins used the term “a beautiful mosaic.”  Mr. Morgan said that Dr. Morris made Bayonne “a beautiful mosaic.”

Dr. Alfredo Rabines, Chief Medical Officer at Carepoint Bayonne Medical Center, said he was impressed by Dr. Morris’s role as President of the Medical Staff at Bayonne Hospital, the medical center’s previous name.  Dr. Morris held that leadership role for three terms. Dr. Rabines said that Dr, Morris is remembered as “a strong leader” who was known for “breaking down barriers.”

Dr. Schubert Perotte, Interim Chief Medical Officer of the Jersey City Medical Center RWJ Barnabas Health, said he was “touched” and “inspired” by the life story of Dr. Morris.  Dr. Perotte cited the African proverb, “’If you want to go fast, you go it alone. But if you want to go far, you go together.’  And that is a testament of the celebration today.”

City Council Member At-Large Loyad Booker presented a New Jersey legislative resolution on behalf of Assemblyman William Sampson IV.  The elected officials who were present joined the members of the Morris family in unveiling the plaque that bears Dr. Morris’s image and biography.

The event included prayers from Rev. Dorothy Patterson, music by jazz musician David “Doc” Watson, and a hymn by the Bayonne Interfaith Choir.