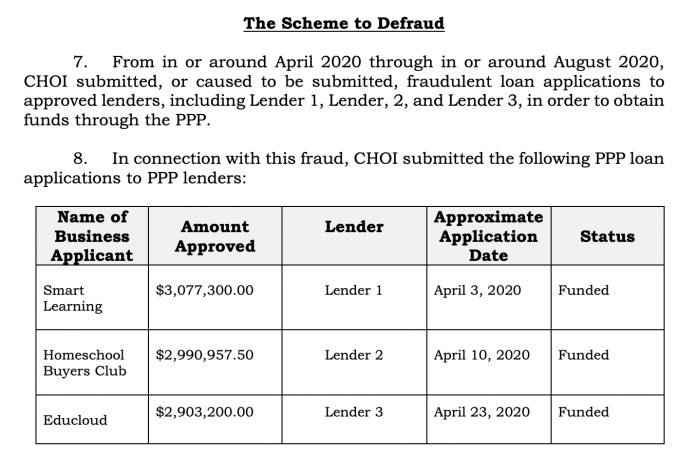 Jae H. Choi, 48, of Cliffside Park, New Jersey, is charged by complaint with three counts of bank fraud and one count of money laundering. He made his initial appearance by videoconference today before U.S. Magistrate Judge James B. Clark III.

Choi allegedly falsely represented to the lenders that the companies controlled by him had hundreds of employees and paid over $3 million in monthly wages. Based on Choi’s alleged misrepresentations, each lender funded each of the three businesses with an approximately $3 million PPP loan. As a result, the complaint alleges that Choi received a total of nearly $9 million in federal COVID-19 emergency relief funds meant for distressed small businesses.

Choi allegedly used the fraudulently obtained PPP loan proceeds to pay for numerous personal expenses, including to buy, among other things, a nearly $1 million home in Cresskill, New Jersey, to fund approximately $30,000 in remodeling and other improvements, and to invest millions more in the stock market through an account held in the name of his spouse.

The Coronavirus Aid, Relief, and Economic Security (CARES) Act is a federal law enacted March 29. It is designed to provide emergency financial assistance to millions of Americans who are suffering the economic effects resulting from the COVID-19 pandemic. One source of relief provided by the CARES Act is the authorization of up to $349 billion in forgivable loans to small businesses for job retention and certain other expenses through the PPP. In April 2020, Congress authorized over $300 billion in additional PPP funding.

The PPP allows qualifying small businesses and other organizations to receive loans with a maturity of two years and an interest rate of 1 percent. Businesses must use PPP loan proceeds for payroll costs, interest on mortgages, rent and utilities. The PPP allows the interest and principal to be forgiven if businesses spend the proceeds on these expenses within a set time period and use at least a certain percentage of the loan towards payroll expenses.

The charges and allegations in the complaint are merely allegations, and the defendant is presumed innocent unless and until proven guilty in a court of law.

This case was investigated by IRS – Criminal Investigation, under the direction of Special Agent in Charge Michael Montanez; inspectors of the U.S. Postal Inspection Service, under the direction of Inspector in Charge James Buthorn; the Small Business Administration Office of the Inspector General; and the Social Security Administration – Office of the Inspector General.

Anyone with information about allegations of attempted fraud involving COVID-19 can report it by calling the Department of Justice’s National Center for Disaster Fraud Hotline at 866-720-5721 or via the NCDF Web Complaint Form at: https://www.justice.gov/disaster-fraud/ncdf-disaster-complaint-form.

The year 2020 marks the 150th anniversary of the Department of Justice. Learn more about the history of our agency at https://www.justice.gov/history .