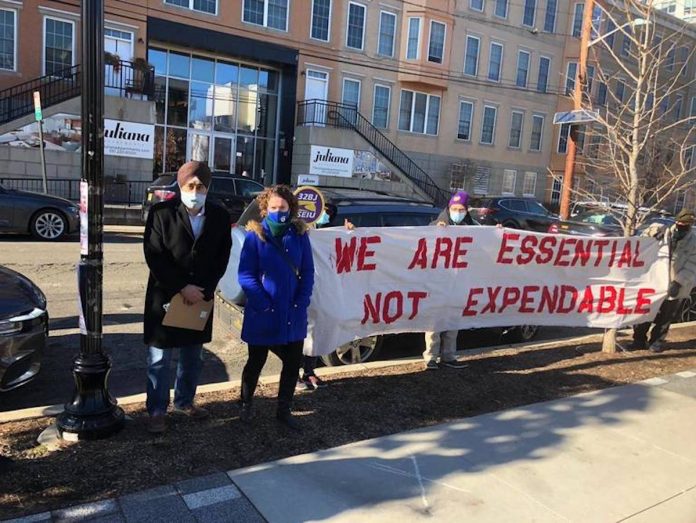 Many frontline concierges at the Juliana started the New Year with wage cut announcements, driven out of the building after contract termination following union negotiations

Hoboken, NJ – Concierges at the frontlines of the coronavirus pandemic at a Hoboken luxury residential building started the new year devastated as many were driven out of the workplace they once loved by unjustified wage cuts.

AEW Core Property Trust, the building owner at The Juliana, a 128-unit luxury apartment building in Hoboken, NJ, suddenly terminated its contract with Guardian Service Industries as 2020 came to a close, and brought in Planned Companies, a contractor with a long record of wage theft and illegal harassment of union supporters.

“After telling us that we were essential for so many months as we served this building during the pandemic, AEW not only terminated our contracts, but their new contractor left me out of the job I loved,” said Jessica Wrisby, a concierge who had been working at The Juliana for over two years. “This isn’t the treatment we deserve after fighting for our rights and risking our lives every day.”

Holding a banner that said “We’re Essential, Not Expendable,” workers and their supporters, including Hoboken Mayor Ravinder Bhalla, Hoboken City Councilperson-At-Large Emily Jabbour, and members of SEIU 32BJ, gathered outside The Juliana on Thursday afternoon to protest the mistreatment and to demand that the owners restore wages and rehire workers forced off the job.

Soon after the workers organized, AEW terminated its contract with Guardian, leaving the building’s five essential workers in a sea of uncertainty amid end-of-year holidays.

“This is a clear example of building owner who is relentlessly trying to prevent essential workers from exercising their right to unionize,” said Kevin Brown, Vice President of 32BJ SEIU and director of the union’s New Jersey district. “Juliana concierges are essential workers who served the building during a devastating health and economic crisis; we cannot overlook such ill-treatment and injustice.”

Many Frontline concierges of the Juliana were informed that they would have to accept a meaningful wage cut starting on New Year’s Day to keep their jobs at the building. The change in wages drove most concierges out of the building, as they could not continue to support their families with the wage cuts.

In his remarks at the rally, Mayor Bhalla said, “Like all Hoboken workers, essential concierges at the Juliana deserve a fair treatment, especially during a pandemic with the scale of economic and health devastations we are experiencing now.” Bhalla continued, “Proposing to cut wages and driving workers out as a result is senseless and must be remedied.”

Justin Belfiore, a concierge who had been working at the Juliana for over two years, said he and the other concierges are sad to leave behind the building and residents to which they have been so devoted.

“Over the years, we developed a close relationship with the residents of the building, we see them as family. I feel like I lost a part of my family this holiday season.” Julian continued, “We’re just a bunch of people providing for our families and trying to make a living, and AEW destroyed the fabric of the community we worked hard to build.”

Planned refused to hire on one of the Juliana concierges, Jessica Wrisby, in retaliation for her union activity. The National Labor Relations Board is investigating the charge.

With more than 175,000 members in 11 states and Washington, D.C., 32BJ SEIU is the largest property service workers union in the country.