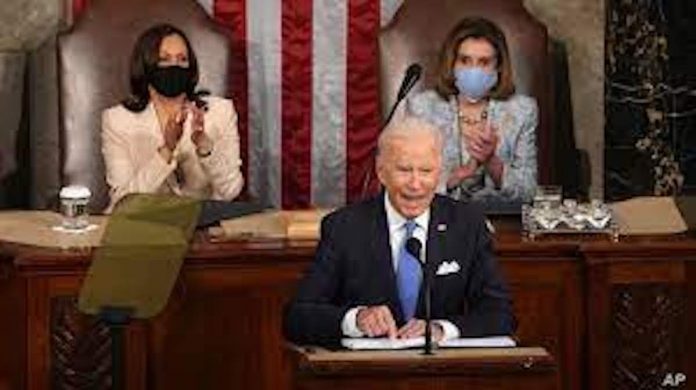 One day shy of his 100th day in the Oval Office, President Joe Biden addressed a joint session of Congress last night, albeit with only about 200 people in the chamber.  The President unveiled the American Families Plan, designed to support our nation’s families through the expansion of education, health care and family leave, among other things.

Congressman Albio Sires (D – District 8) stated, “Yesterday…President Biden addressed Congress for the first time and presented his plan to support and strengthen American families. His proposal, the American Families Plan, would build on the American Rescue Plan enacted in March to provide emergency relief for Americans due to the COVID-19 crisis, as well as his proposed American Jobs Plan to improve our nation’s infrastructure and boost our economy.

The American Families Plan will expand access to high-quality education, health care, child care, and family leave to give more hardworking Americans a shot at the American dream. It would also make the tax code fairer to help working- and middle-class families. President Biden’s bold vision will help American families thrive and move our nation forward. I look forward to working with my colleagues in the House to advance the President’s plan for the benefit of all American families.”

Meanwhile, the American Civil Liberties Union of New Jersey issued a detailed press release, breaking down the President’s first one hundred days in office, and what still needs to be accomplished:

Below are a few key issues that the ACLU and dedicated activists like you have been pushing for since day one. For each, you’ll find a quick snapshot on where this administration has made progress, where we must continue applying pressure, and immediate action you can take.

Progress made: The administration successfully directed the Justice Department not to renew contracts with federal, privately-operated prisons.

Work still needed: The government must now end the war on drugs, grant mass clemencies, end the federal death penalty, and protect Black lives by reducing the role of police in communities.

Progress made: The administration rescinded the Muslim ban and renewed DACA, among other important actions impacting immigrants’ rights.

Work still needed: Biden-Harris must reunite every family torn apart by Trump’s cruel family separation policy and provide restitution and care – including a pathway to citizenship – as well as rebuild our asylum system and dismantle the deportation and detention machine.

Progress made: Trump’s transgender military ban was repealed, and the Supreme Court’s decision in Bostock v. Clayton County is again being followed to protect LGBTQ people from discrimination.

Work still needed: As state-level attacks on trans youth continue, the federal government must do all it can to affirm that trans youth belong in our country by issuing an executive order for accurate federal IDs for trans and non-binary people.

→ Take Action: Accurate IDs for All

Work still needed: States continue to be at the center of the fight over abortion, but the right to abortion shouldn’t depend on where you live. It’s time to end the Hyde Amendment – a discriminatory ban on abortion coverage – and permanently lift unnecessary federal restrictions on medication abortion.

Progress made: Biden issued an executive order increasing access to the ballot box for eligible people that are incarcerated and ended Trump-era attacks on government-sponsored racial and gender equity training.

Work still needed: It’s going to take bold measures to truly address America’s legacy of systemic discrimination. Biden-Harris can start by working with Congress and the FCC to ensure broadband access for all, by permanently extending the expanded child tax credit, and by forgiving $50K in student loan debt per eligible borrower, which disproportionately burdens people of color – all priorities of our Systemic Equality agenda.

ACLU Supporter, these urgent priorities are not a full list of everything done in the first 100 days – or of every issue that still must be addressed in the work ahead.

But each day that passes without action is a day of families still torn apart or traumatized by cruel immigration policies, of lives swallowed by racist policing systems, and of Black, Indigenous, and other people of color contending with systemic racism.

That’s why it’s up to all of us to continue pushing for a country where “we the people” truly means everyone – and we at the ACLU will not stop fighting until it does.

I hope is not true but if she’s found guilty I hope she never breathe agai!!!!!