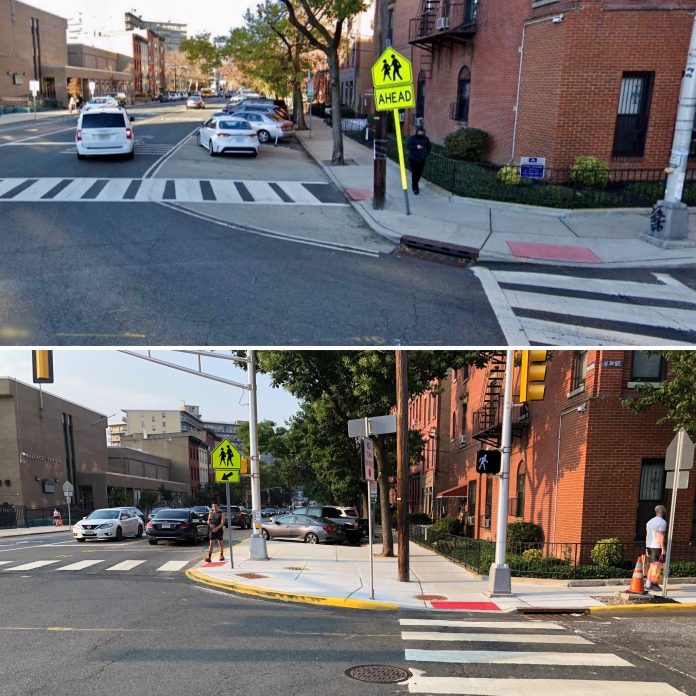 Mayor Ravi S. Bhalla and Hudson County Executive Tom DeGise today announced that Vision Zero pedestrian safety improvements and traffic signal upgrades at the intersection of 11th Street and Willow Avenue have been completed and are now in effect.

“Hoboken is making progress in eliminating all traffic-related injuries and deaths by 2030,” said Mayor Bhalla. “Through critical infrastructure upgrades like this newly completed project, we are making our streets safer for neighborhood residents and Wallace Elementary School students. I thank Hudson County Executive Tom DeGise and the Hudson County Board of Commissioners for supporting these intersection upgrades and providing funding for the project.”

“Changes that calm traffic flow and reduce pedestrian crossing distances like those now in place at 11th and Willow simply make sense,” said County Executive Tom DeGise. “We were glad to provide this reasonable investment that supports the Mayor and City Council’s larger vision for a safer Hoboken at a spot in town that cried out for it.”

According to the recently adopted Vision Zero Action Plan, Willow Avenue between 11th Street and 12th Street is part of Hoboken’s high crash network, which includes locations where crashes occurred at a disproportionately higher rate than the rest of the city.

These upgrades will help make the street segment safer by increasing pedestrian visibility and reducing conflicts between turning vehicles and pedestrians crossing the street. According to a recent analysis of crashes in Hoboken, 88 percent of bicycle and pedestrian crashes occurred at intersections.

“We appreciate the Vision Zero pedestrian safety enhancements and traffic signal upgrades on 11th Street and Willow Avenue,” said Dr. Christine Johnson, superintendent of the Hoboken Public School District. “Families will undoubtedly notice the efforts put forth by the City of Hoboken to make walking to and from Wallace Elementary School safer for both adults and children.”

The Vision Zero Action Plan, officially adopted by the Hoboken City Council on July 21st, acts as the City’s roadmap for eliminating all traffic-related deaths and injuries by 2030.

The focus on improving pedestrian safety comes as a result of the findings of the City’s first-ever comprehensive five-year crash analysis to determine what contributing factors most commonly cause crashes where people are injured or killed.

To learn more about the City’s Vision Zero initiative, go to https://www.vzhoboken.com/.