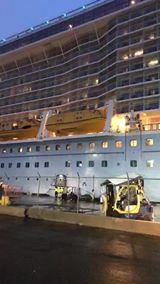 Members of the Centers For Disease Control and the New Jersey Department of Health were on the scene at the Cape Liberty Cruise Port in Bayonne this morning, as Royal Caribbean’s Anthem of the Seas docked at 6 am.

More than two dozen Chinese nationals were aboard the ship, having been screened for the Coronavirus.   In total, four passengers were taken to University Hospital in Newark for additional testing, while 23 passengers displaying no symptoms were scheduled to return to China at some point.

The ship had originally left Bayonne on January 27.  Royal Caribbean issued a statement this morning, saying it appeared unlikely anyone on the ship was infected with the Coronavirus, but as a precaution, the Anthem of the Seas is delaying its scheduled  4 pm Friday departure for the Bahamas until the CDC receives final word on the test results.

Bayonne Mayor Jimmy Davis informed residents with tweets updating the situation, saying  in a 8:59 am tweet “the CDC considers this  “Below Low Risk.  All other passengers released w/no action needed.”

Quarantine energy is all

Murphy is not happy

Knuckleheads Murphy not too happy

If they didnt have guns they would get their ass beat

I feel sorry for the elderly man. But, they need to witness WHITE on WHITE crime. Just to see what it feels like. We’ve been dealing with this for over 400yrs.

That man is bleeding from his head fire them all pos

"A warrior who had more than he needed would make a feast. He went around and invited the old and needy….The man who would thank the food–some worthy old medicine man or warrior–said: “…look to the old, they are worthy of old age; they have seen their days and proven themselves. With the help of the Great Spirit, they have attained a ripe old age. At this age the old can predict or give knowledge or wisdom, whatever it is; it is so. At the end is a cane. You and your family shall get to where the cane is.” – Black Elk, Oglala Sioux nation Holy Man

Let me explain to you what's going on right now so you can understand the severity of this. Federal and local governments are encouraging their police departments to control protest through total dominance, if a citizen/human being does not comply then that person will be beaten into submission and then placed under arrest. At the same time that this is occurring the federal government is prosecuting police officers who are told to follow orders and establish dominance. I'm no rocket scientist, but it seems to me like the American government is playing out the people and the police. Building dissension Among Us in order to keep us completely divided and incapable of uniting against the corrupted Elite of this nation. Oldest trick in the book!

The way he dropped stiffed and then his phone falls out his hand that’s horrible, WTF is going on all around with cops and ppl why they can’t just unite, hope they give an update on the man and officers

And they keep walking wtf remorese whatsover this is someones father