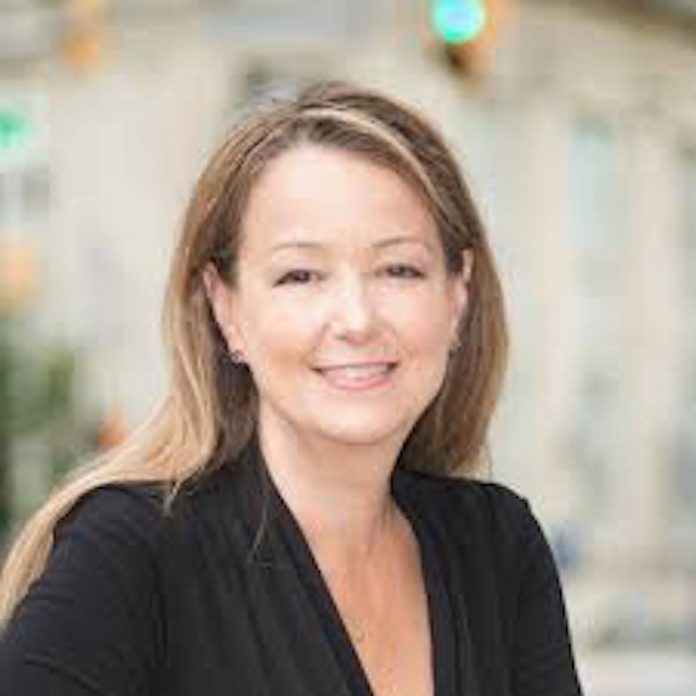 Hoboken’s 2nd Ward Councilwoman Tiffanie Fisher today posted her latest newsletter, where she was extremely critical of the direction Mayor Ravi Bhalla is taking the city in terms of development.  The Councilwoman states, “I wanted to bring your attention to something I have been really concerned with and that is the direction development is taking in Hoboken.  I have had this concern for a while, but the proverbial straw is a specific project that the mayor has put on the City Council agenda for us to vote on this Wednesday.”

Here is what the Councilwoman wrote to residents:

DEVELOPMENT – WE CAN AND WE HAVE TO DO BETTER
When Mayor Bhalla decided to amend the Monarch settlement agreement earlier this year and move the DPW garage from its current location on Observer Highway temporarily to a location adjacent to the NW Park at 13th and Jefferson, he created quite a mess.  Of course moving something as unappealing to any neighborhood would be fought.  No one wants it in their backyard.  If it had to move, further north in the North End Rehabilitation Area is the most logical place to put it given there are no residences above 15th street.  Also, he committing to a September 2022 date to move the garage by put us in another bind.  In what is 17 months from now only two realistic solutions can be accomplished in this timeline:
Yet the mayor is not working on either of these two options, but instead is pushing a plan to build the DPW garage at the City’s sole cost, at the base of a massive development that would take multiple years to complete.  In exchange he is planning to give the developer significant upsizing, rezoning, and development benefits.  Even if this was an acceptable plan, which it isn’t, there is ZERO chance that the project that I will describe below can be completed with all of the necessary infrastructure improvements to the area in 17 months even if they started today.
Also, remember it is an election year.  Trying to address voter concerns is highest during the lead up to Election Day.  If you are a single issue voter and this is your issue you should want certainty of execution – meaning an agreed and deliverable temporary location before Election Day.  Now is when you have the most leverage.
IMHO, the right path is secure a temporary location now, and then work towards having this up and running ASAP while negotiating across a few alternatives for a permanent site.
Why the current proposal is not acceptable.
Remember just a couple of months ago I walked you through the proposed North End plan that the administration, my City Council colleagues and I, along with many of you, had worked on for almost five years and was just approved by the City Council in February?  The one that we spent over $400,000 on two planners to complete?  The one that would bring much needed commercial uses to the North End?  A plan that would still provide for residential development, but keep it moderate in scale?  A plan that eliminated full city block, monolithic structures and created a linear park to break up the giant city blocks.  A Linear Park that was central to the plan and would run west to east and allow more light and air and a more pedestrian / resident friendly street level experience?  That plan?
The mayor’s proposal would throw all this away and undermines the entire North End plan.
This is the building proposed by a developer that is being put forth by the mayor to the City Council for a vote this Wednesday night.  What do you think?

It is for the ENTIRE 400’ x 200’ city block that is between 15th and 16th and Clinton and Grand.  It would be E-Shaped, oriented to the water, 152′ high / 14 floors with a monolithic wall of windows running along the west side of the entire block.  It would be taller than all other buildings in the plan by at least 30′ and is bigger than 770 House which the same developer built at at 7th and Jackson. 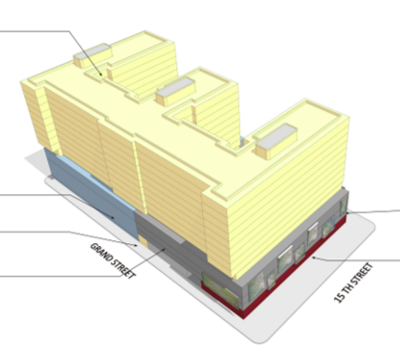 Even without considering what the North End plan calls for, what do you think?  In scale and character with Hoboken?  And don’t get me wrong, I do not fault the developer for this proposal at all.
The North End plan and this property.
The North End plan calls for the massive city blocks to effectively be broken into two separate buildings with a park between them to avoid building monolithic structures which are out of character with Hoboken.  Importantly, the park being part of a four-block ‘linear park’ that connects to the waterfront and that is the main open space feature of the North End plan.  The proposed project would be on the block circled in red. 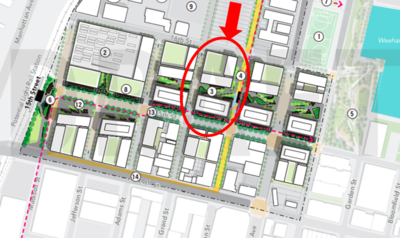 If the proposed project were to be built, it would looke something like below.  It would be completely out of scale with the rest of the North End and it would effectively ruin the impact of the Linear Park. 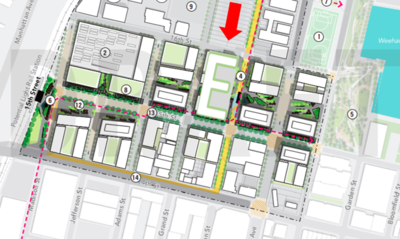 On the site in question, the North End plan calls for the building on the south side, facing 15th St. to be an 80’/ 5’ floor commercial office building.  One of the reasons the buildings on this side were kept at the lower heights of only 80′ so that the linear park would benefit from the maximum amount of natural light.  The building on the north, facing 16th St., allows for an up to 120’ / 12 floor residential building.   What is being proposed by the mayor would make the entire building residential with 14 floors / 152′ across the entire block.  This picture shows the relative massing of the buildings in the plan – in yellow is the block where the proposed building would be. 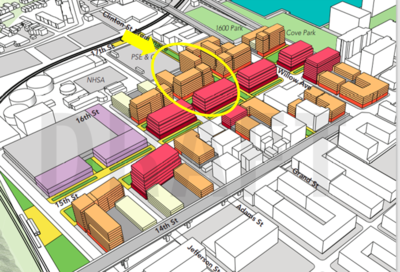 Examples of sight lines in the North End plan along 15th street and the Linear Park are below.  If you notice in the 15th Street diagram, there is a 30’ setback zone required to facilitate the green circuit and promenade features of the area.  In the building the mayor is proposing, this setback would be reduced to 20′ giving the developer an even greater footprint to build on at the expense of our green circuit and promenade. 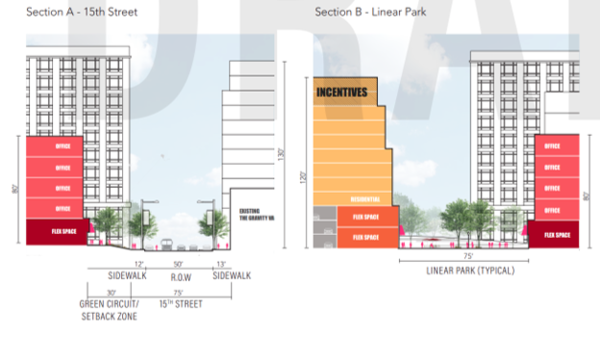 What does the property owner get from this proposal?
A ridiculous amount of financial upside versus what is currently called for in the North End plan.
What does Hoboken get?
There is so much financial room to improve this proposal.   Councilwoman Fisher continued…
The only Ticking Clock is the one for a temporary location for the DPW garage by September 2022.
The city should be focusing 100% of its efforts to lock in a temporary location and work expediently to build it.  There are other choices available in the north end.  And there are other possible permanent ones as well.  I think it is more than acceptable to go back to this developer with better terms for the longer term solution.  But we shouldn’t be voting on a proposal that is based upon the worst possible outcome as the starting point.
In our subcommittee last week that included Council VP Giattino, Councilman Cohen and me, we asked that the administration ask the developer to preserve the linear park and the two building structure as the next step.  We were also told, as it is written now in the North End plan, that the building could not be taller and thinner because of the height limitations demanded by Mayor Stack of Union City.  Yes, in all of this, the views of the neighbors up on the cliff even take priority over Hoboken residents and taxpayers.   We can, and the mayor should want, to do better for Hoboken.

There is more to share with you, but will need to do so in my next newsletter.  If there is anything in particular you would like me to cover, please let me know.
And please feel free to email me at CouncilwomanFisher2@gmail.com or call me at 201-208-1674 to discuss what you have read or anything else that is important to you.  Be safe and have a great rest of week!