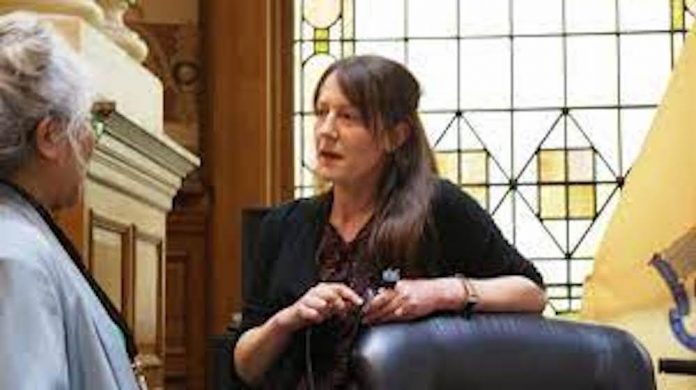 Jersey City Councilwoman Amy DeGise, the former Chairwoman of the Hudson County Democratic Organization and the daughter of County Executive Tom DeGise, is now receiving death threats following her hit-and-run accident last month in Jersey City.  DeGise, who struck a bicyclist who ran a red light, with her car and fled the scene, returned six hours later, reporting the accident to Jersey City Police.  DeGise, who is teacher, was on her way to work when the incident took place.

Since the July 19 incident, there have been calls for DeGise to resign her Council seat, and a rally held over the weekend calling for her to do the same.  To date, neither Mayor Steven Fulop nor any of the Council members who ran with DeGise on Fulop’s re-election ticket, have formally asked for DeGise to step down.

DeGise is now receiving death threats.  She has filed an official report with the Jersey City Police Department about the numerous death threats and vile pieces of online harassment that she has received in recent days. The death threats were made by email and on social media.

Some of the threats were quite vile.  They included comments like, “drop dead,” she needs to be “shot on sight,” and calling her a “stupid ugly bitch.”  Others were much more graphic.  The school where DeGise works, County Prep High School, part of the Hudson County Schools of Technology, has also received many disturbing voicemail messages.

DeGise has not commented publicly since the hit & run, but a spokesman for the Councilwoman stated, “Like many other women in the public eye, Councilwoman DeGise has been the victim of online harassment in the form of incredibly disturbing threats of violence and even death threats in recent days,” said DeGise spokesman Phil Swibinski. “It is reprehensible for anyone to make these kinds of direct threats of violence and we hope that the perpetrators are prosecuted to the full extent of the law. This situation has created strong feelings in many people, but no one should condone these kinds of violent threats and this should be a reminder to everyone to tone down the rhetoric and refrain from inflammatory actions that could have real world consequences.”

Councilwoman DeGise reported the threats to the Jersey City Police Department on Monday by telephone and two officers were dispatched to her home to take a statement and screenshots of the harassing messages.  The Councilwoman has remained in touch with officers assigned to the case and an investigation has begun to ascertain the origin of the messages.  It will then be determined whether criminal charges are appropriate.

DeGise received two summonses from the Jersey City Police for the July 19 incident.  The bicyclist was an UberEats driver, Andy Black.

Earlier this week, Governor Phil Murphy declined to ask the former Hudson County Democratic Organization Chairwoman to step down from her Council post, but he called the incident “behavior that’s unacceptable.”