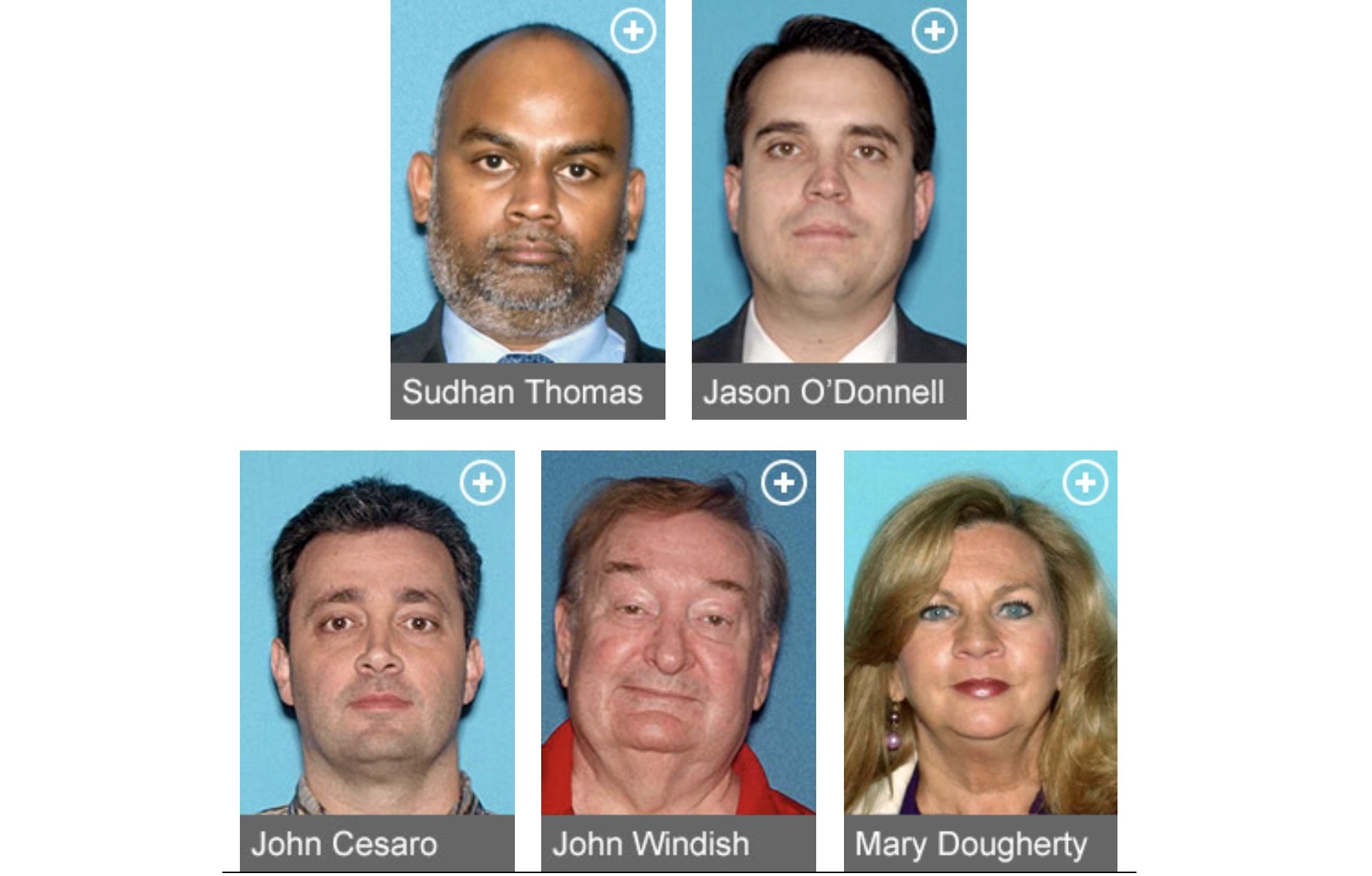 TRENTON – Attorney General Gurbir S. Grewal announced that five current and former public officials and political candidates in New Jersey – including Jersey City School Board President Sudhan Thomas and former State Assemblyman Jason O’Donnell – have been charged with taking bribes in a major investigation of political corruption in Hudson and Morris counties conducted by the Office of Public Integrity and Accountability (OPIA).

The following five defendants were charged separately in criminal complaints with second-degree bribery in official and political matters:

“We allege that these political candidates were all too willing to sell the authority of their public office or the office they sought in exchange for an envelope filled with cash or illegal checks from straw donors,” said Attorney General Grewal. “This is old-school political corruption at its worst— the kind that undermines the political process and erodes public faith in government. We are working through the Office of Public Integrity and Accountability to create a culture of accountability in New Jersey, where public officials know they must act with integrity or else face the consequences.”

“These cases reflect one of OPIA’s core missions, which is to root out corruption and misconduct in state and local government and related elections,” said OPIA Director Thomas Eicher. “We are determined to hold public officials and candidates responsible for their actions, no matter their political positions or alliances. New Jersey has some of the nation’s strongest anti-corruption laws, and we will use them to ensure that government officials single-mindedly serve the public interest, not their own selfish interests.”

The defendants were charged in an investigation by the Office of Public Integrity and Accountability which began in early 2018 and focused on political figures in Hudson and Morris counties who allegedly solicited illegal campaign contributions from the cooperating witness in return for promised official action to provide him with government work.

As set forth in the complaints, the defendants are alleged to have engaged in the following conduct:

Incumbent Jersey City School Board President Sudhan Thomas, who at the time of his conduct also was preparing to run for Jersey City Councilman in 2021, is charged with accepting $35,000 in cash bribes, $10,000 delivered on one date and $25,000 delivered on a second date.

During a conversation about the cash payments before they were delivered, the cooperating witness (CW) and Thomas had the following exchange:

The alleged criminal conduct occurred between May and July 2019. Thomas lost his bid for re-election to the Jersey City School Board in November, and his term on the Board ends at the end of December.

Former State Assemblyman Jason O’Donnell, who ran unsuccessfully for Mayor of Bayonne in 2018, is charged with accepting a $10,000 cash bribe. O’Donnell allegedly solicited $10,000 in “street money” for his mayoral campaign from the cooperating witness. In return, O’Donnell allegedly agreed to provide the cooperating witness with tax work from the City of Bayonne if elected mayor.

O’Donnell allegedly accepted a paper bag containing $10,000 in cash from the cooperating witness at his campaign headquarters. After the cash was handed over, they had the following exchange:

Cesaro allegedly accepted an envelope containing $10,000 in cash and $2,350 in checks from the cooperating witness, but later returned the cash, asking the cooperating witness to replace it with checks. The two allegedly discussed using “straw donors.” Under New Jersey election law, it is illegal for a person to provide money to another person, known as a “straw donor,” to make a political contribution to a specific candidate. At a later fundraiser, Cesaro accepted two checks for $2,600 each – the individual limit for contributions per election per candidate – which the cooperating witness described as “my straws,” along with another check for $150.

During a conversation about the contributions before they were delivered, the cooperating witness and Cesaro had the following exchange:

CW: Johnny, listen, all I want to do is the tax work. That’s all I’m looking to do.
Cesaro: I become mayor, I got your back.

The alleged criminal conduct occurred between April and May 2018.

It is alleged that Windish accepted an envelope containing $7,000 in cash from the cooperating witness. When the cash was delivered, they had the following conversation:

CW: “I need you to, I need your commit that I’m your borough attorney and I need more work, John.”
Windish: “You got it.”

State election law prohibits cash contributions exceeding $200 from a single contributor for a single election. The alleged criminal conduct occurred in May 2018.

Mary Dougherty, a real estate agent from Morristown, allegedly accepted a bribe of $10,000 from the cooperating witness – initially delivered as cash but later converted to checks from “straw donors” – for her unsuccessful campaign for Morris County Freeholder in 2018. In return, she allegedly promised to support the reappointment of the cooperating witness as counsel for Morris County.

The pair met again at the same restaurant, where Dougherty accepted four checks, each in the amount of $2,500 payable to “Mary for Morris Freeholder.” When the checks were delivered, the cooperating witness and Dougherty had the following exchange:

CW: “These are my straws… so I just need your support for my reappointment. Don’t forget me.”
Dougherty: “I won’t. I promise. A friend is a friend, my friend.”

The alleged criminal conduct occurred between August and October 2018.
Attorney General Grewal commended all of the prosecutors and detectives who conducted and supervised the investigations for the OPIA Corruption Bureau, under the leadership of OPIA Director Thomas Eicher. Deputy Attorneys General Pearl Minato, John A. Nicodemo, and Anthony Robinson are prosecuting the cases, under the supervision of Counsel to the Director Anthony Picione. Former OPIA Deputy Chief Jeffrey Manis also supervised the cases.

Second-degree crimes carry a sentence of five to 10 years in state prison and a fine of up to $150,000. The second-degree charges against those who held public office at the time of the alleged conduct – Thomas, Cesaro, and Windish – carry a mandatory minimum sentence of five years in prison without eligibility for parole under New Jersey’s enhanced penalties for official corruption.

The charges are merely accusations and the defendants are presumed innocent until proven guilty.

Attorney General Grewal created the Office of Public Integrity and Accountability in September 2018 to combat corruption and strengthen public confidence in government institutions. Earlier this month, the Attorney General issued a directive codifying OPIA and making it a permanent part of the Attorney General’s Office. That directive established the OPIA Corruption Bureau as the lead office within the Department of Law & Public Safety for the investigation and prosecution of state criminal violations involving corruption and abuse of public trust.

OPIA has a toll-free Tipline 1-844-OPIA-TIPS for the public to report corruption. The AG’s Office has an Anti-Corruption Reward Program that offers a reward of up to $25,000 for tips leading to a conviction for a crime involving public corruption. Information is posted at: www.nj.gov/oag/corruption/reward.html.