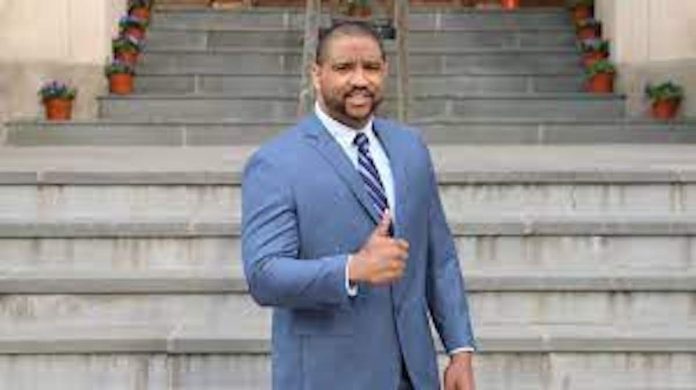 Photo Credit:  jcitytimes.com                                                                                                                                                                                                                      Independent, Jersey City Councilman At Large candidate Elvin Dominici submitted the following Letter to the Editor to Hudson TV regarding his candidacy in the November election:
My journey in this great nation started when I immigrated with my family to Jersey City. This is the place where my friends and family live and where I’ve raised my own children. Since a young boy, I learned from my mother that there is no greater human value and gratification than helping others. This is the reason why I have been involved in community activities since 2009. I took initiative in helping our local minority communities by organizing many events, including workshops to assist individuals with filling out their citizenship applications, organizing a rally in Journal Square in favor of Immigration Reform, and becoming an advisor to the institution of Hispanic American Commerce Association (HACA), which is the largest by far small business association of Hudson County. However, I know that my individual actions are not enough to help our community in a better and bigger capacity. These are part of the reasons why I’ve announced my candidacy for Councilman-at-Large in Jersey City’s November 2, 2021 Municipal Election.
My goal as an independent candidate is to bring checks and balances to the current or any potential municipal administration in our city. I’ve learned during my time in the community that the residents want to ensure that they have a dedicated public servant who can listen and act in their favor. This has been something lacking from the majority of the current council, as we’ve witnessed during the countless public council meetings where hours of public testimony, most with an ample supply of evidence, are ignored while they just rubber stamp what the administration wants from them.
We can waste countless hours complaining about the lack of empathetic leadership in our city; but, I would rather spend that time meeting with local residents and highlighting my platform to work for and be accountable to the local residents of Jersey City. I pledge to lead the charge with fellow independent minded individuals on affordable housing, our public school funding crisis, and support for small businesses and residents severely impacted by the current pandemic, among other things. This is why I am announcing My Triple AAA Platform for Jersey City: Accountability, Affordability, and Accessibility.
Accountability
For far too long have our cries fallen on deaf ears in the council chambers. Week after week residents voice out their concerns with ordinances only to see their city council “representatives” turn around and vote in favor of the administration’s agenda. As an independent council candidate the only commands I will take on legislation is from the people who elected me. I will apply my background in finance and banking to make sure every cent is spent for the betterment of our communities
Affordability
Jersey City is growing rapidly, we seem to be ignoring the residents who built our city and the dynamic cultural representations that make every neighborhood unique. As the skyscrapers and condominium conversions continue, the less fortunate are left to struggle with high rents and lack of responsibilities from slumlords. With a pandemic looming over our heads, the cry for affordability has been louder than ever before. As your council person, I plan on fighting to keep Jersey City Affordable by:
Overturning the “Inclusionary Zoning Law, ordinance No. 20-089” which was written to ensure that the City can negotiate for illegal exactions from developers without actually requiring the affordable housing to be provided.
2.      Not providing any new Tax Abatements unless they guarantee Affordable Units for the 30% Annual Medium Income families.
Accessibility
Technology has provided us opportunity to connect to our constituents like never before, but it still feels hard for us to get in contact with our elected officials. If elected, I will increase accessibility by:
2. Hosting continuous community meetings in neighborhoods throughout the city.
3. Support and sponsor legislation that creates more transparency in City Government such as: Civilian Complaint Review Board (CCRB) and others.
4. Audit all current PILOT payments and vote to revoke any PILOT in violation of their agreements.
The lack of independent leadership on the Jersey City Council continues to grow as each day passes. Our residents will have an opportunity in November to bring fresh, independent leadership to the council to ensure that all members are accountable to those who matter the most, the residents of Jersey City! The power to influence change in the life of the residents of Jersey City has to be trusted to independent leadership who can hold the administration accountable. Please join my journey to become the next Councilman At Large of Jersey City.  #JCDeservesBetter