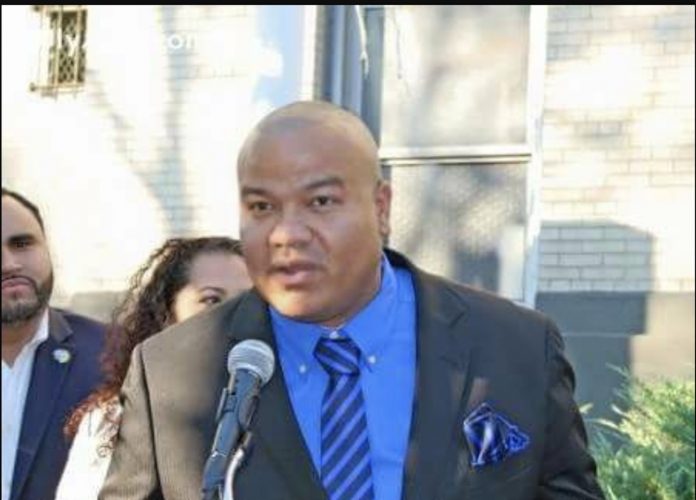 A former West New York municipal employee, who unsuccessfully ran for a Board of Education seat in 2016 against the wishes of the Administration, and who was fired during the time Felix Roque was Mayor, is suing the town, the former Mayor, current Mayor Gabriel Rodriguez, who served as Public Works Commissioner at the time, and former Deputy Mayor Silivo Acosta, who was the Supervisor of the Department of Public Works.

Alex Navas is reportedly the person who took video footage in 2017 of DPW workers removing construction debris from the home of Israel Rodriguez, the father of then-DPW Commissioner and current Mayor Gabriel Rodriguez.

In the complaint filed in United States District Court, dated January 29, 2020 (case number: 2:19-CV-17583-CCC-SCM), Navas alleges his First Amendment, Freedom of Speech, rights were violated.  The lawsuit states, “On or about February, 2018,  plaintiff and other employees were interviewed by Univision Channel 41 and made public plaintiff unfair employment situation and defendants lack of implementation of town law and ordinances.  It showed how the Department of Public Works of West New York, picked up debris from Commissioner Gabriel Rodriguez father’s house, Mr. Israel Rodriguez, and from a neighbor’s house.”

The complaint goes on to say that Navas, as a result of his allegations and the Univision report, was subsequently attacked publicly during a town commission meeting.

“Plaintiff was engaged in speech protected under the First Amendment, which included, among other things, running for the position of Trustee of the West New York Board of Education against the stated desires of municipal officials then in power, and cooperating with investigative reporters seeking to reveal corruption in the West New York Department of Public Works.”

The complaint further states that the defendants took “adverse or retaliatory action against plaintiff Navas.”  in addition, the legal paper further says the defendants ordered Navas “to spy on the employees of the Fire and Safety Department” and report his findings back to then-Supervisor Acosta.  Navas, according to the complaint, “found said Defendant’s order to be unethical and refused to abide by Defendant’s wishes.”

The complaint says Navas was transferred several times, promised numerous, different municipal positions, took a course for certification to become a health inspector which never occurred, was suspended or threatened with suspension on more than one occasion, all resulting in his depression and stress.

The complaint also alleges that immediately following his BOE loss, Navas “started being harassed, passed over for promotions, disciplined without just cause, suspended without pay, defamed, and finally fired on September 6, 2017. Accordingly, this is a lawsuit alleging retaliation for my exercise of my constitutional rights of speech and association under both the Federal and New Jersey State Constitutions.”

Navas is seeking to be rehired by the town with full seniority, back pay and other benefits.  He also seeks to receive all compensatory and punitive/exemplary damages, plus court costs.

A text message sent by Hudson TV to former Mayor Roque went unanswered.  However, Mayor Gabriel Rodriguez told Hudson TV during a telephone conversation that “it is ironic he is lumping me into it since I ran a recent election against Roque.  It’s a false accusation that we looked into and found to be frivolous. It’s an intimidation tactic that was refuted.  My family had nothing to do with it.  The DPW workers were helping an elderly woman down the street.”

damn thats wack as fuck...i might have to pull that move tho...my license bout to expire wtf smh

That blonde chick was all over this protest. Terrible

GET THE FUCK OUT IF NYC! Dam fascists!!