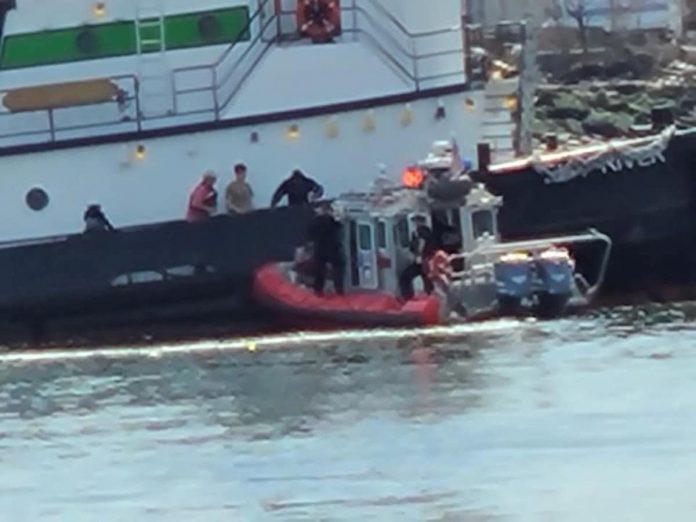 **This story was been updated a second time with new information.

Someone jumped from the deck of the Bayonne Bridge Saturday afternoon into the Kill Van Kull.  Bayonne Fire Department Deputy Chief Bill Bartos provided the following information:
“First responders were dispatched to the Bayonne Bridge at 1:59 pm today on a report of a jumper.  Arriving units found a tug boat in the Kill Van Kull, just east of the bridge pulling someone aboard their vessel. Bayonne Fire Boat Marine 1 pulled up alongside the tug and transferred the person to their boat. Firefighters provided medical care on the person as they headed towards the boat launch at 16th Street Park, where they were met by EMS.”
Deputy Chief Bartos added, “The incident, drew a large response from multiple agencies including; BFD, BPD, McCabe EMS, BOEM, NYPD, NYPD Aviation, FDNY, and PAPD. The Port Authority Police Department is conducting the investigation.”
According to the Office of Mayor Jimmy Davis, the unidentified jumper did not survive.  On Sunday night family members confirmed the deceased was a 19-year old male from Bayonne.   The name of the deceased has not been released.