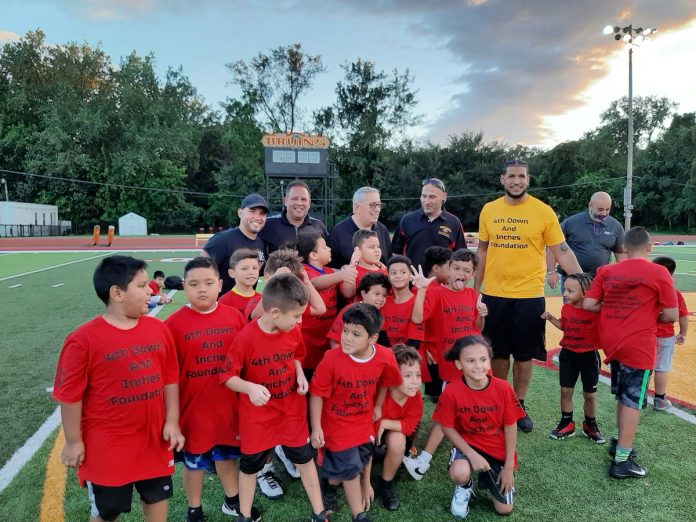 He played quarterback for the North Bergen High School Bruins under the late-coach Vincent Ascolese when the school was a feared, grid-iron power house in Hudson County.  He went on to play college ball at Temple in Philadelphia as a safety, then took the field in the National Football League as a tight end for five seasons, having been drafted by the Chicago Bears.  He also suited up for the Miami Dolphins, Buffalo Bills and Tampa Bays Bucs.  He even experienced the XFL.

His name is Evan Rodriguez, and on Thursday night at Bruins Stadium in Braddock Park, he returned to run a one night football camp for local kids as young as six.

Rodriguez is part of the 4th Down and Inches Foundation, a group which gives back to youth in ways that are much more than blocking technique and passing yardage.  Rodriguez is helping kids in his hometown learn that if you want something bad enough, hard work and commitment to your goal will help you achieve it.

Rodriguez has even joined the township Recreation Department as one of its football coaches.  He says he loves being back helping the youngsters and wants them to know they can always talk to him about anything on their minds.  Mayor Nicholas Sacco calls Evan “the perfect role model.”