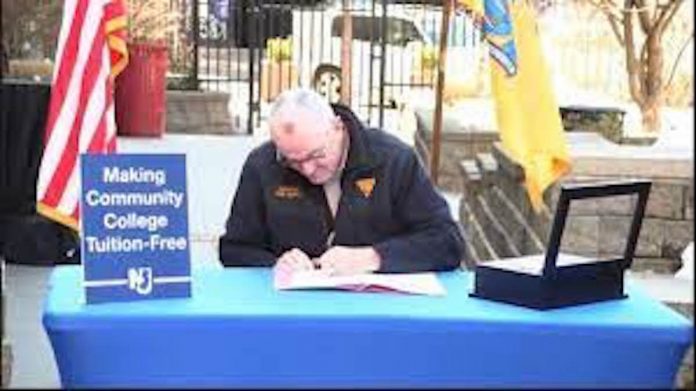 Governor Phil Murphy came to the Jersey City campus of Hudson County Community College on Friday to sign legislation (A4410) permanently making a tuition-free education at all 19 of New Jersey’s community colleges for low-and-moderate-income students, law.

The measure, called the “Community College Opportunity Grant Program,” which was prime sponsored by numerous legislators including Senator Sandra Cunningham (D – District 31) of Jersey City, previously only allowed students from households earning $65,000 or less to participate in the program.  That figure had gone up since Murphy’s first state budget in 2018, when it was $45,000.

The program is available to students for as many as five semesters.   The grant covers all tuition and fees that remain after a student utilizes all other grants and scholarships available to them.

The Governor included $27 million in taxpayer funds for the program in his proposed state budget of $44.8 billion introduced on Tuesday.  Another of the bill’s prime sponsors, Senator Teresa Ruiz of Essex County, said the measure represents “a monumental step towards a more equitable higher education landscape.”

During the bill signing ceremony, the Governor stated, “From day one, our commitment as an administration has been to ensure no deserving student should be shut out of a future that a community college education can help because of a tuition bill.”  Murphy went on to say that the program is designed to help students who have either had to “slow down their degree,” or lengthen it out over many years because they had to work multiple jobs or they just could not afford the cost of going to school on a full time basis.

The Governor’s new budget proposal also revives plans to allocate $50 million to offer two years of tuition-free education at Rutgers, Rowan, and other public colleges and universities for students in households earning $65,000 or less. Murphy originally proposed the idea in the state budget for the current fiscal year, but it was removed because of the pandemic.