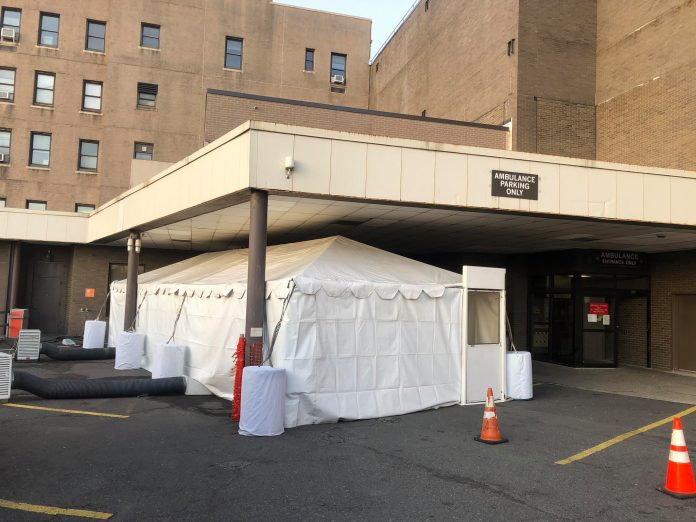 It’s a frightening and confusing time for the world with no end in sight and in Jersey City, Mayor Steven Fulop is trying to allay community-wide fears by being as transparent as possible while navigating the murky waters of the coronavirus pandemic.

According to Fulop, hospitals in town have set up tents to better screen people coming into the emergency room so as not to overwhelm the system and avoid contaminating the medical personnel.

The mayor is communicating directly with his constituents daily on Facebook and Twitter about exactly what’s going down and urging them to hit him up there or on email with any thoughts, questions or concerns.

“Any expected duration or just plan for foreseeable future,” Matt Schneider says. “For those of us with kids in daycare, this will have a significant impact. Just to be clear, I’m not opposed to this by any means. I appreciate Jersey City’s leadership trying to figure out an effective plan.”

One of the biggest questions they’ve had is about self-quarantine and ‘shelter in place’ policies for Jersey City.

“And here is where I am,” Fulop says. “We have been at the forefront nationally of proactive policies since this started but our belief is that, ‘shelter in place’ is most effective if approached regionally.

The mayor says they’re sharing information to protect people on the front line, and reminding everyone that the first step isn’t to go to the ER, it’s to go to your doctor.

“And to facilitate additional parking relief for residents, school parking lots will be open to the general public while schools are closed,” the mayor says. “Thank u to Superintendent Walker for working with us on this as parking is a challenge + every spot helps while ppl work from home.”

Fulop knows people are anxious and says he feels the more information his office can provide the better equipped residents will be to deal with this.

You can email questions to fulops@jcnj.org or tweet the mayor @StevenFulop.

“Hope it helps,” he says, adding that he thinks they understand their choices now.

When it comes to businesses closing, it wasn’t easy getting everyone on board.

“They indicated to us they have decided that closing is a good idea now,” Fulop says, of the Newport Mall.  “Truthfully, It’s a big waste of time when these big corporations think they’ll get different rules.”

“Will anything be done to help them offset the financial losses this will cause,” says Doyle. “It’s the right decision, but how are we going to do right by our hard-working neighbors?”

And the mayor shows just how real he is by sharing with his family every time he washes his hands.

“My wife says that it scares her more that I announce it as if it is a special occurrence,” Fulop says.

When it comes to imposing limitations for bars and nightclubs, they’ll be reaching out to all of the local grocery stores (3 registers or more) and setting aside hours for elderly residents, people with disabilities, pregnant residents.

“So that only these residents will be in the stores from 9-11am,” Fulop says.

He says the stores have been receptive as they recognize that this needs to be a communal effort since these are the most vulnerable residents and crowded supermarkets present a challenge.

“As my team recognized right away where this could go, we also spent lots of time better understanding our hospital system’s strengths and weaknesses,” says the mayor.

And following suit from Gov. Murphy’s Tuesday announcement of statewide curfews and closures, Fulop announced his own for Jersey City:

The following restrictions will also apply: All restaurants are prohibited from providing dine-in services but will be allowed to provide take-out, delivery, drive-thru. These restrictions do not apply to grocery stores, cafeterias within nursing homes or similar facilities.

Fulop says he thinks Jersey City is on the right path in balancing and respecting their residents to make smart choices.

“And also promoting social distancing in a responsible way w/some basic rules on some locations,” the mayor says.

Residents had a lot to say on social media and they weren’t holding back.

“You need to make the tough but right call like Hoboken did,” says Danielle H. “People look to the gov’t in times like this and you’re sending a mixed and dangerous message that it’s okay to be out and about freely. It is not. Do this for the health and well-being of your city. It starts with you.”