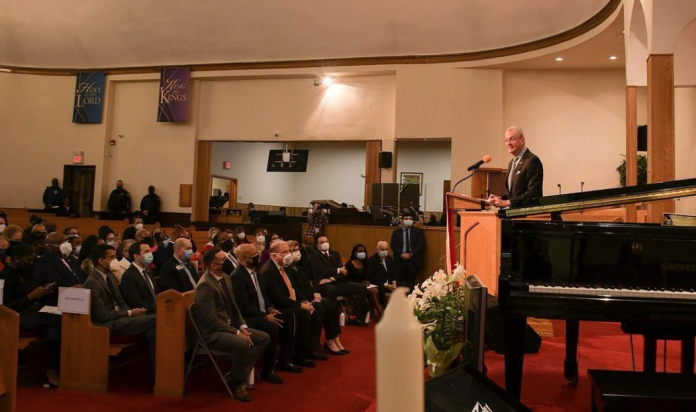 04/19/2022
PATERSON – Governor Phil Murphy today visited Saint Luke Baptist Church in Paterson to urge legislators to take action and pass a comprehensive gun safety legislative package that was initially proposed by the Governor in April 2021. In December 2021, the Governor was joined by Assembly Speaker Craig Coughlin in Metuchen to urge the passage of the majority of these gun safety bills. If passed by the Senate and Assembly and signed into law, the bill package discussed today would be the third wide-ranging gun safety package signed by the Governor since taking office.

“The bills that I introduced one year ago are basic measures that will keep guns out of the wrong hands, help law enforcement apprehend the perpetrators of gun violence, and hold the gun industry accountable for its deceptive and dangerous practices,” said Governor Murphy. “I hope to work with my Legislative partners to continue making New Jersey a national leader in gun safety and prevent the meaningless violence and loss of life that results from the gun violence epidemic.”

“Tragically, America experienced three mass shootings over the Easter weekend. And we are all still reeling from the horrific attack in the Brooklyn subway. The new gun safety legislation championed by Governor Murphy will fight gun violence at the source and make our communities safer,” said U.S. Congressman Bill Pascrell, Jr. “I joined our Governor in Paterson today because cities in North Jersey want comprehensive gun safety reform. Our neighbors are tired of living in fear. They are tired of thoughts and prayers. They want action. On the federal level I have brought home $14,500,000 for Paterson law enforcement in the past ten years alone. I am also leading the Crime Gun Tracing Modernization Act to help law enforcement better trace guns used in crimes. As co-Chair of the Congressional Law Enforcement Caucus, I am leading the fight in Congress to protect our communities and we are fortunate to have a partner like Governor Murphy here in New Jersey. Let’s get these guns off our streets.”

“Gun violence has been crippling many of our communities for generations. I am proud New Jersey has taken steps to address it by enacting strong, common sense measures and we hope the federal government takes action and follows New Jersey’s lead. We battle everyday with the flow of out of state guns and the second hand market. By allowing the AG to take action and hold gun manufacturers accountable it is my hope that we can encourage them to do something about the illegal market once and for all,” said Senate Majority Leader Teresa Ruiz. “While we advance these efforts, we know that prevention is our best tool. By making investments in human capital from the womb to the workforce, from early childhood education to young adult mental health services, we can take a holistic approach and better support our communities as a whole.”

“Long before the Covid-19 pandemic became a scourge in our state and across the country, and in the lives of those we know and love, the crisis of gun violence was a very different kind of public health threat that visited death, despair and destruction on our communities, in our streets, and inside our homes,” said Senator Nellie Pou. “We must do more, and we must do better. The more holistic approach being offered by the governor and many of my fellow leaders represents a new chapter, a new chance and a long-needed recommitment of resources and policy changes to stem gun violence and stop this crisis in its tracks.”

“With the surge in gun violence there are steps we should take to keep our communities safe and protect residents from senseless gun crimes,” said Senator Cryan, a former law-enforcement official who headed the Union County Sherriff’s Office. “There are also actions we can take that will help prevent the tragedies of accidental shootings and gun suicides. The secured storage of firearms is one of the most effective ways of preventing gun deaths, requiring those who move to New Jersey to abide by our gun laws is a matter of common sense, and increasing the age to 21 to purchase shotguns and rifles will make life be safer for young people.”

“Recent events have shown us how important it is to continue to adopt comprehensive, common-sense gun safety laws that will keep our communities safe,” said Assemblyman Benjie Wimberly. “In cities like Paterson, far too many people have felt the impact of gun violence. We must do everything possible to protect our residents and ensure no one has to say goodbye to a loved one because of senseless violence.”

“Under the leadership of Governor Murphy, and in partnership with the Legislature, New Jersey is nationally recognized as a model for preventing gun violence through common-sense laws that protect our communities, keep our residents safe, and save lives,” said Acting Attorney General Matthew J. Platkin. “Today we support Governor Murphy in calling for swift action on legislation that will further our efforts to break the cycle of gun violence, support victims of gun crimes, and hold perpetrators accountable.”

“These bills are not only helping to protect our residents but they aid law enforcement in battling gun violence by providing resources which allow us to aggressively investigate crimes quickly and more efficiently.” said Colonel Patrick J. Callahan, Superintendent of the New Jersey State Police. “The safety of our residents is our top priority. We remain commited to removing dangerous criminals from our streets who choose to terrorize our communities with senseless violence.”

“We must combine all efforts and build comprehensive gun violence prevention approaches across the state,” said Steven Campos, Community Resource Director, Hudson Partnership CMO. “We need both gun safety policies, and a robust community prevention system that heals and breaks the cycle of violence.”

“The proliferation of and access to guns in urban communities is a major contributor to the violence that we witness almost on a daily basis and seen most over this past week in New York, Pittsburgh and South Carolina,” said Rev. Kenneth Clayton of Saint Luke’s Baptist Church. “We applaud the NJ State Legislators and Governor Murphy for creating laws to make access to guns in our state a more elongated process in attempt to prevent such violence in the future.”

“This bill package includes vital, common sense reforms that would provide comprehensive solutions to the gun violence that devastates New Jersey communities,” said Amy Faucher, a volunteer with the New Jersey chapter of Moms Demand Action. “Our state continues to lead nationally in the gun violence prevention movement, and furthering that status means passing these important bills. We thank Governor Murphy for his support in the fight to end gun violence in New Jersey, and we look forward to working with lawmakers to help advance this package and save lives.”

Holding the Gun Industry Accountable:  In New Jersey, almost 80% of guns used in crimes are originally purchased outside of the state.  However, the gun industry has failed to take any steps to stem the flow of guns to the illegal market through gun shows, flea markets, straw purchasers, and theft.  The Governor proposes amending the state’s public nuisance laws to prohibit the gun industry from endangering the safety or health of the public through its sale, manufacturing, importing, or marketing of guns.  (For reference: A-1765/S-1893 (McKeon/Ruiz).