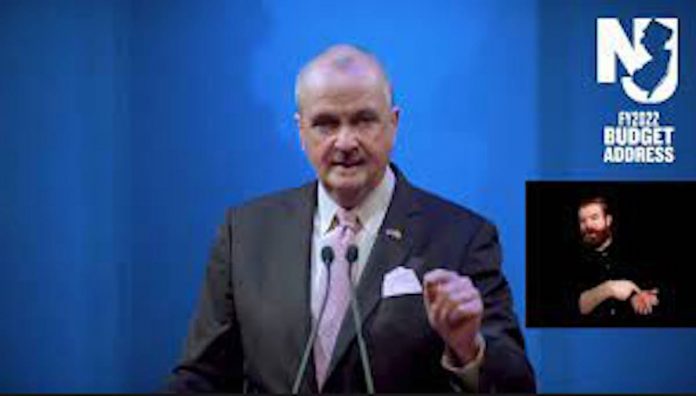 Governor Phil Murphy, in a pre-recorded address, unveiled New Jersey’s proposed state budget on Tuesday, a spending plan totaling $44.8 billion which does not include any new taxes or any increased taxes or fees.  The budget includes the state’s first, full contribution to the public pension system in 25 years and increases aid to schools.  It also proposes income tax rebates for hundreds of thousands of low-and-middle-income New Jerseyans who have been suffering financially for years, long before the pandemic hit the Garden State.

Saying New Jersey’s finances are in a much improved state, Murphy credits the big borrowing during the current fiscal year as the reason why the Treasury Department is predicting that the surplus could grow to $6.3 billion by the end of June.  Analysts say that will allow the Governor to see $4.4 billion in new spending over the current budget.

So, for the present time at least, Murphy has dropped plans to raise taxes on cigarettes, gun purchases and corporations which have employees on Medicaid.  By the end of the next fiscal year, the Governor believes that the state’s surplus will have been spent down to $2.2 billion.

Under the Governor’s proposed budget, some 754,000 families would receive a tax rebate up to $500 in July.

While the majority of Democrats are praising the proposed budget, some Republican lawmakers are criticizing it.  They believe the Governor purposely under-estimated revenue projections so the surplus could be touted as higher.  They warn the state’s taxpayers will pay the price for the proposal after this year.

Assembly Minority Leader Jon Bramnick (R – Union) stated, “There’s no real plan to affect affordability in this state.”  He added that the combination of borrowing and stronger-than-expected revenue created “the perfect storm” for the Governor to spend more money without making cuts.

Sussex County Republican State Senator Stephen Oroho warned that Murphy’s plan to “spend down billions in surplus won’t be sustainable beyond a single year.”  Oroho predicted that if Murphy is re-elected next year, “it’s an absolute certainty he will call for tax increases.”

Meanwhile, former Governor Chris Christie was highly critical of the proposed budget, saying it will “cost taxpayers billions.  My last budget for NJ was $34.7 billion.  Today’s proposal is $44.8 billion.  7.2% average spending increase per year.  29.1% over four years.  And we borrowed $4.5 billion to support operating expenses and those bonds are not callable. Will cost taxpayers billions more.  Elections do have consequences.”

Jack Ciattarelli, the former Assemblyman and Republican frontrunner for the GOP gubernatorial nomination to challenge Murphy in the upcoming November election, stated, the Governor wrongly “cast himself as the state’s savior today.  It’s an insult.”

Murphy for Governor spokesman Jerrel Harvey stated, “It’s not surprising to see Jack Ciattarelli’s attack dog attempting to spin eight years of financial mismanagement and disinvestment under his administration as a win for New Jersey. Governor Murphy has spent the past three years digging out of the mess left behind by the former Governor’s failed economic record, which includes 11 credit downgrades, skipped pension payments, and budgetary gimmicks year after year. Rather than repeating the same mistakes from the Christie playbook, Governor Murphy has undertaken the hard work necessary to restore sustainability to the State’s finances and put forth budgets that prioritize the middle class over the wealthy and well-connected.

New Jerseyans understand that by investing in education, restoring funding to a gutted pension system, and doubling down on progressive values, we can build back from the pandemic and move our state forward.”

New Jersey Democratic State Committee Chairman John Currie added, “Governor Murphy’s budget proposal once again shows his commitment to not just leading us through the pandemic, but putting our state in a position to come out of it stronger and fairer than ever before. From making the first full payment into the state pension system in decades, to increasing funding for public schools, to providing real property tax relief to middle class families and seniors and much more, the Governor’s budget proposal meets this urgent moment and it will put us on a path to a brighter future by investing in what our residents need most. It’s never been more clear how important it is to keep New Jersey moving forward by putting the people of our state first, and Governor Murphy continues to live up to that.”

“Nearly one year after the coronavirus pandemic upended life as we knew it, New Jersey’s economic outlook appears more promising than we could have anticipated just a few short months ago. In crafting the Fiscal Year 2022 budget, we must be cognizant of the current challenges we face due to COVID-19 and make investments to help our economy and residents recover.  I, along with my colleagues on the Budget Committee, look forward to examining what was put forth today. We appreciate the breadth and positivity of the Governor’s proposals, and we share his goal of moving New Jersey forward.
The Legislature has the enormous responsibility of approving a responsible balanced budget that advances our shared priorities and works for every New Jerseyan. It is not a responsibility we take lightly.  In the coming weeks we look forward to gathering information and perspective from residents and stakeholders from across the state during the hearing process. The Budget Committee is committed to crafting a budget document that will prioritize the needs of hardworking New Jersey residents, protect our most vulnerable, and move our entire state forward.”
The Legislature will now review the Governor’s budget proposal and make changes, if any, before the budget must be adopted by July 1.