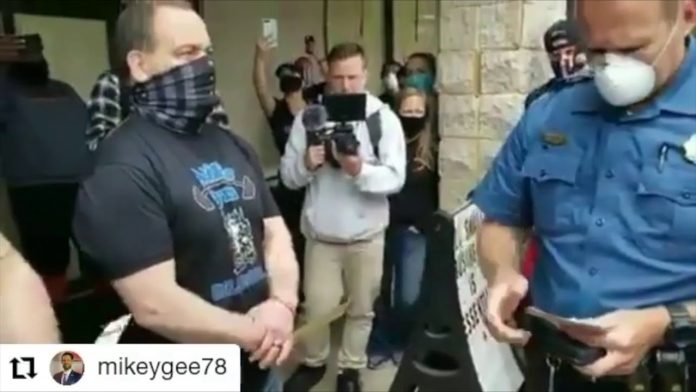 By now you have probably heard all about the gym in south Jersey which defied Governor Murphy’s Executive Order to remain closed because the business was not considered an essential service.  We all know the Governor and his Administration have taken careful steps and serious consideration into ways to help stem the spread of the COVID-19 pandemic.

Atilis Gym is located in Bellmawr, Camden County.  The owners’ decision to reopen their membership-only business on Monday, in clear violation of the law, was broadcast live on the Fox 5 show, “Fox & Friends.”  And make no mistake, the Governor took notice during his daily coronavirus press briefing on Monday afternoon saying, “If you show up at that gym again tomorrow, there’s going to be a different reality than showing up today.  These aren’t just words.  We’re going to enforce this, but also don’t want to start World War III.”

The gym’s owners were joined at the business’ reopening at 8 a.m. by their attorney and many patrons who couldn’t wait to get inside and start exercising.  Co-owner Frank Trumbetti told Fox 5, “We truly believe that if we don’t do this, in the end, we will have zero rights and no say in what happens.”

The gym’s owners made it clear they plan to reopen again today.  When police arrived yesterday morning they told the crowd, many of whom were seen not wearing face coverings, and the owners, they were in violation of the Governor’s Executive Order.  They were given a formal warning.  Several hours later police returned and gave the owners disorderly conduct citations, but did not arrest them.  Based upon the Governor’s remarks on Monday, that will not be the case today if the owners defy his Order again.  Expect arrests to take place.

What makes this story interesting is the fact that Trumbetti and his partner say they are not doing this for financial reasons. It is all about constitutional rights.  Co-owner Ian Smith stated on Tucker Carlson Tonight, “We think so far, this has been just a gross violation of constitutional rights.  The 14th Amendment states that no state shall pass any law that infringes upon our rights as citizens, and we’ve been forced into our homes.  Enough is enough.”  Trumbetti has also said that he recently lost a relative to the coronavirus.

This whole situation makes you wonder whether such a peaceful demonstration of defiance like this would happen in Hudson County.  After all, many of those in the crowd outside of the gym yesterday morning were waving American flags, wearing pro-Trump attire and carry signs you would rarely see in Hudson County.  One sign stated, Stay Poor Vote Democratic.  Is it possible the person holding that sign has a different opinion about the importance of the financial impact versus the constitutional rights of business expressed by the gym’s ownership?

It must be stated that the owners of the gym told the media they had put safety precautions into place, such as social distancing and permitting only 20 percent of the facility’s capacity to be used at any time.

I guess we will have to wait and see what happens later today.  Are the owners really willing to spend time behind bars and face financial penalties in defiance of the Governor’s Executive Order?  How far are they willing to take this?  Time will tell.