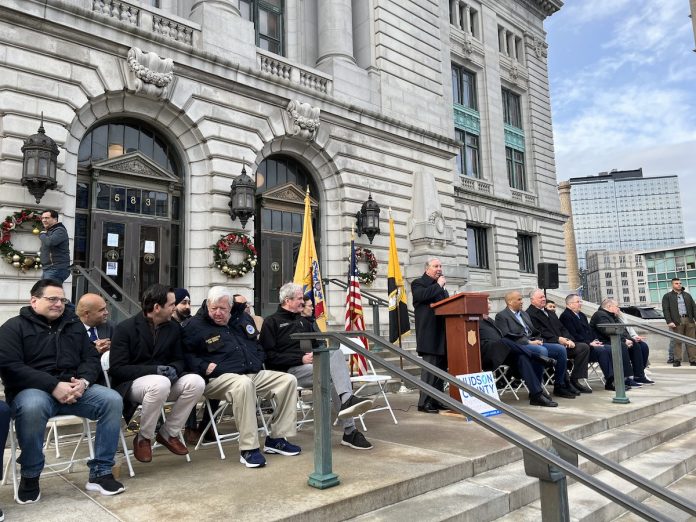 The Hudson County Democratic Organization announced the candidates it is supporting for the upcoming June Primary Election during a Saturday morning press conference on the steps of the Justice William Brennan Courthouse in Jersey City.

The HCDO unveiled the candidates for New Jersey Senate and Assembly in newly configured Legislative Districts 32 and 33, along with Craig Guy for Hudson County Executive.  Guy, currently the Chief of Staff of County Executive Tom DeGise who will be retiring, has one announced Democratic Challenger, Jersey City’s progressive activist Eleana Little, who unsuccessfully ran for a then-Freeholder seat several years ago.

Candidates for Senate and Assembly in District 31, which covers Bayonne and a portion of Jersey City were not announced, although well wishes went out to incumbent Senator Sandra Cunningham who is recuperating from an illness.  The incumbent Assembly persons in 31 are Angela McKnight and William Sampson IV.  According to HCDO Chairman Anthony Vainieri, District 31 candidates will be announced soon.

“This is an exciting day for Hudson County as we officially begin the Primary Election by endorsing seven truly outstanding candidates, all of whom have long records of public service and varied experiences that will enable them to become the excellent representatives that the people of our county deserve,” said Chairman Vainieri.

The HCDO candidates for the redrawn 32nd District, which now consists of Hoboken and a section of Jersey City, are incumbent Assemblyman Raj Mukherji for the Senate, a ten year Trenton veteran, and attorneys John Allen, Hoboken Mayor Ravi Bhalla’s former Chief of Staff and past President f the Old Bridge Board of Education, and Jersey City’s Jessica Ramirez, a trial attorney focusing on sexual abuse cases and member of the city’s Planning Board.

In the 33rd Legislative District, which absorbed North Bergen, Secaucus and West New York from the former 32nd District, State Senator Brian Stack is seeking re-election.  Senator Nicholas Sacco, who found himself in Stack’s district following redistricting will be retiring from Trenton, but will seek re-election as North Bergen’s Mayor in May.

Senator Menendez stated,. “Each of these candidates represents the best of Hudson County and I know they will work hard between now and Election Day, so they each have my full support and endorsement. I look forward to partnering with them to fight for our shared Democratic values here in Hudson County, in Trenton and in Washington.”

“As one of our economic, cultural and political powerhouses, Hudson County is critical to New Jersey’s future, and I am glad to see Chairman Vainieri endorse this exciting team of leaders to keep the county and our state moving forward,” said Senator Booker. “I’ve seen the hard work, dedication, and leadership these candidates bring to their communities. I’m confident they will continue to bring people together and fight for policies that empower New Jersey families.”