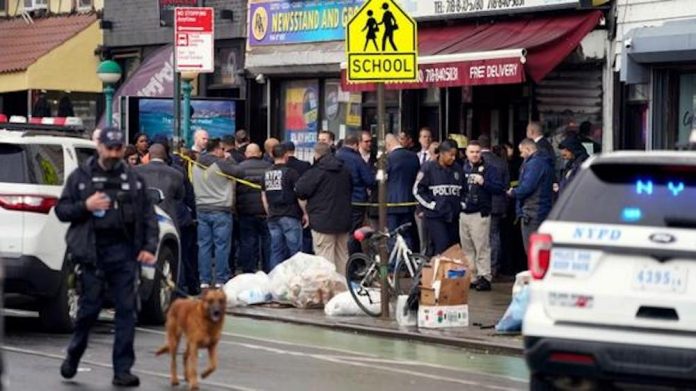 Thirteen people were injured when a gunman opened fire at the 36th Street, Brooklyn subway station during this morning’s rush hour.  According to various media outlets, as of 10:45 am, New York City Police were searching for a man wearing a gas mask and orange construction vest, the New York Times reports.  The actor apparently opened fire as the doors of an R train closed, according to ABC7.

Information is still sketchy with different reports providing different information about the rush hour attack that left wounded commuters bleeding on a train platform and police searching for the shooter.

The Associated Press says “fire personnel responding to reports of smoke at the 36th Street station in Brooklyn’s Sunset Park neighborhood at around 8:30 a.m. found at least 13 people were hurt, but — aside from the five shot — there were no details on what those injuries entailed.”

Fire and police officials were investigating reports that there had been an explosion.  According to the police department in a tweet there were “no active explosive devices at this time.”  Multiple smoke devices were found on the scene, said mayoral spokesperson Fabien Levy.

The Jersey City Police Department will share updates here as they become available. They ask the public to report any tips related to this matter.   Please call 911 or the JCPD Tip Line at 855-JCP-TIPS or 855-527-8477.