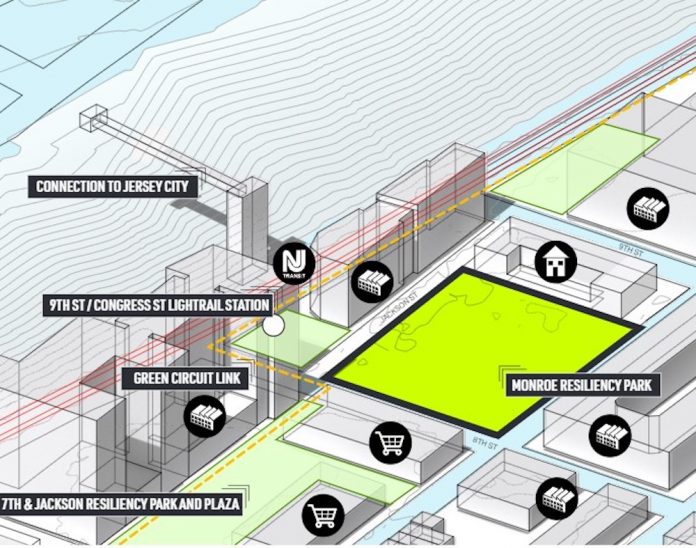 Hoboken Mayor Ravi Bhalla and the City are moving forward with plans for a new resiliency park at 800 Monroe Street, with a public planning process planned for the fall to gain community input. In addition to providing open space amenities, the new park is proposed to withhold over half a million gallons of stormwater to further mitigate flooding in west Hoboken. The 1.43-acre park will become the City’s fourth resiliency park, which includes the Northwest Resiliency Park, Southwest Resiliency Park and its expansion, and the 7th and Jackson Resiliency Park for a total of over 10 acres of parks with above and below-ground flood mitigating infrastructure. 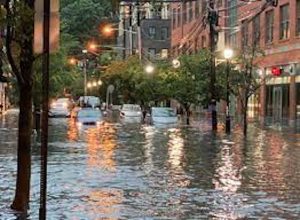 “The creation of Hoboken’s fourth resiliency park at 800 Monroe is another major step forward in our efforts to provide more green space while simultaneously mitigating flooding during heavy rainfall events,” said Mayor Bhalla. “Hoboken will continue to lead the way for the region in implementing dual-purpose, innovative strategies to improve the quality of life for all of our residents, and this park is the latest example. I look forward to hearing input from our community as to the park’s amenities in the coming months.”

The Hoboken City Council unanimously awarded the contract to the engineering firm AECOM to provide proposed park designs at the July 20 council meeting. By October, the City and AECOM will host the first of several public engagement sessions to gather community input, which will be used to create design alternatives that could integrate active and passive recreation amenities, green infrastructure, resiliency components, and urban design. The park is also proposed to connect to the Green Circuit, as detailed in the City’s Master Plan.

The project team will launch a project website in the coming months for members of the public to stay informed throughout the design process.

“Expanding open space in the Third Ward has been a majority priority for me,” said Council President and Third Ward Councilman Michael Russo.  “This location will complete a vision for an expanded park system in our neighborhood. Once completed, this park will help not only alleviate flooding in the third ward and beyond but also give residents new recreational opportunities. Thank you to the administration for prioritizing this space as part of the Monarch deal.”

“Another public park to be designed and more resiliency features to be built in to help combat the effects of climate change is a win-win for the City and especially the west side where more parks and flood prevention are needed,”said Councilman at-Large Jim Doyle, a member of the Hoboken Green Team.

The City acquired the property, initially slated for residential development, through a three-way land swap agreement with the Applied Parties last year. Before the Monarch acquisition, a 186-unit residential building was planned for the lot. As a part of the Monarch settlement, the City will utilize approximately $550,000 in funding from the Applied Parties for the 800 Monroe design process, with no impact to the municipal budget.

“Instead of a large residential building with over 180 apartments located at 800 Monroe, residents of Northwest Hoboken can look forward to having a beautiful resiliency park in the neighborhood designed with the public in mind,” said Fifth Ward Councilman Phil Cohen, Chair of the Community Development Subcommittee.  “I look forward to meeting with the community and the AECOM project team to design a park that reflects our needs as a City.”

The City continues to engage in a community design process to double the size of the Southwest Resiliency Park at Block 10 at Observer Highway and Harrison Street. The City and project team will present a final proposed concept design on the above-ground active recreation and below-ground stormwater infrastructure to mitigate area flooding this fall.