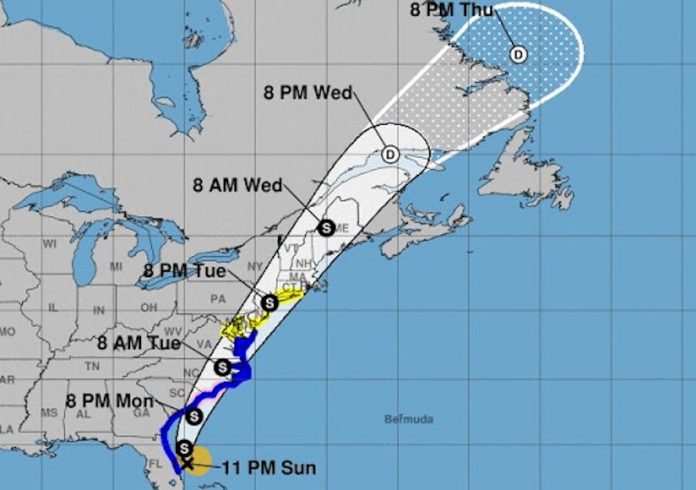 The City of Hoboken has issued the following advisory in preparation for the impact of Tropical Storm / Hurricane Isaias, which is expected to hit the New York metropolitan region in the next 24 to 30 hours.  Hoboken officials warn residents to be prepared for the storm’s impact.  They have also put in place a no driving policy:

The Hoboken Office of Emergency Management (OEM), City of Hoboken and North Hudson Sewerage Authority (NHSA) continue to prepare for the impact of Hurricane Isaias on the tri-state region on Tuesday. The National Weather Service is currently predicting 2-4 inches of rain, with heavier amounts possible in low lying areas, along with damaging winds. A flash flood watch is in effect for Hudson County from the National Weather Service from Tuesday morning through late Tuesday night.

Mayor Ravi S. Bhalla and OEM Coordinator Sgt. William Montanez have instituted travel restrictions from 8 am on Tuesday until 8 am on Wednesday. Driving is prohibited except for public safety and essential services (government, utilities, medical personnel).

Residents urged to stay indoors during the storm

Due to the threat of high winds and heavy rain, residents are urged to stay indoors at all times on Tuesday.

Residents should move cars from flood-prone intersections and streets

OEM advises residents parked in flood hazard areas of the City (which correspond to the regions in red in the attached map), and especially in flood prone intersections identified in the map, to relocate cars to parking garages or higher elevation. If the storm is greater than a 50 year flooding event, the majority of streets in Hoboken, especially west of Garden Street, could flood.

The City of Hoboken will provide reduced rate $5 per day parking in municipal Garage B (located on 2nd Street between Hudson and River Streets), Garage D (215 Hudson Street), and the Midtown garage (371 4th Street) for residents with a valid resident parking permit or temporary parking permit from 4 pm Monday through 4 pm Wednesday. Garage parking space is limited and available on a first-come, first-served basis. When discounted parking is offered, garages frequently fill before the start of the discount period. Residents who wish to park in the municipal garages outside of the discounted hours will be charged the regular garage fees during non-discount hours.

If municipal parking garages fill up, residents with vehicles parked in flood hazard areas are encouraged to utilize private garages. Rates and locations of private garages can be found on websites including parkwhiz.com or spothero.com. The parking garage at Newport Mall is also an option for Hoboken residents.

Street sweeping regulations are suspended on Tuesday. At the current time, street sweeping is scheduled to resume on Wednesday to facilitate the clearing of debris from the street after the storm.

Given the potential for heavy flooding and power outages due to heavy winds, residents should take the precautions of obtaining enough water and food, including non-perishable goods, for at least 72 hours. Residents should also have flashlights and batteries available.

All outdoor dining is suspended for Tuesday. Businesses must bring any loose objects including tables and chairs, as well as streaterie materials and structures. All outdoor fitness classes in City parks are also canceled for Tuesday.

With high winds projected, residents and property owners should secure or bring in all unsecured objects from outdoor locations including balconies, including lawn chairs and tables. Garbage cans should be secured or tied down to prevent litter on streets.

Any businesses or residential properties on ground or basement levels should utilize any deployable flood protection measures including sand bags, if available, to mitigate potential flood damage.

Learn more about Hoboken READY, an initiative to prepare people and property for storm events.

Learn more about FEMA recommendations to prepare for a Hurricane.

Learn more how Hoboken and NHSA prepare for, respond to, and recover from intense rainfall storms.