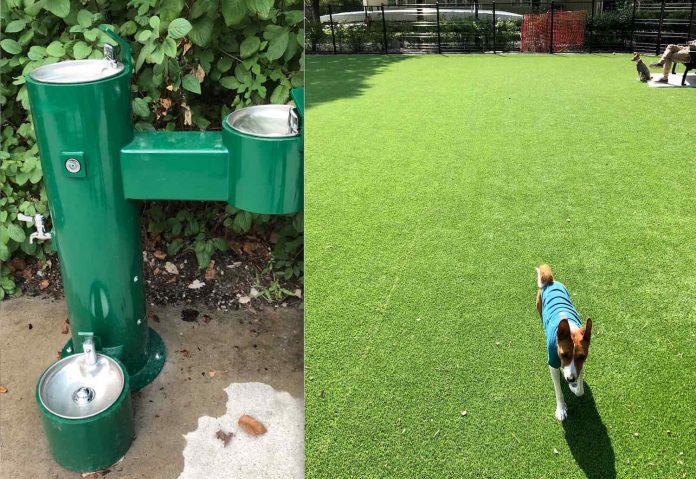 “I’m very pleased that Hoboken now has a new, modern dog run at Maxwell Park,” said Mayor Ravi S. Bhalla. “I’m confident that these new features will be well utilized by our dog owners, and I’m thankful to all of the residents who have provided continued feedback to my office. Thank you also to the Maxwell Park Board for funding these improvements.”

In addition to the new turf dog runs at Maxwell, Church Square and Stevens Parks, the City installed a brand-new dog run at 2nd and Hudson Streets in 2019.

Hoboken has also installed over 30 pet waste stations in Hoboken in partnership with property owners this year.

IRS AGENT DISTRIBUTED COCAINE FROM BERGEN COUNTY TO NEW YORK, HE IS CURRENTLY OUT ON BAIL

A year of protests by residents, municipalities, activists and environmentalists paid off last night at NJ Transit’s Board meeting, as the agency announced it is going back to square one, the drawing board, so to speak, on its natural gas-powered plant. According the NJ Transit, the microgrid, kno...
View on Facebook
·Share

IRS AGENT DISTRIBUTED ALLEGEDLY UP TO 5KG OR MORE OF COCAINE FROM BERGEN COUNTY TO NEW YORK, HE IS CURRENTLY OUT ON BAIL ... See MoreSee Less

IRS AGENT DISTRIBUTED COCAINE FROM BERGEN COUNTY TO NEW YORK, HE IS CURRENTLY OUT ON BAIL - Hudson TV

NEWARK, N.J. – An IRS supervisory revenue agent was arrested on charges of conspiracy to distribute cocaine, U.S. Attorney Craig Carpenito announced. Michael Shelli, 41, of Albany, New York, was arrested at his home by agents of the Drug Enforcement Administration (DEA). He is charged by complaint...
View on Facebook
·Share

They should charge him taxes on all the coke he sold

They been doing that, aint nothing New, union city cops and Bergen county Cops Too. U pay em a nuce change and they transport anything! Ask the Lieutenant

Governor Phil Murphy has nominated Dr. Angelica Allen-McMillan, Ed.D., the Interim Executive County Superintendent for Morris County, has the next Commissioner of the New Jersey Department of Education. Governor Murphy, in making the announcement, stated, “From day one, I pledged to select a Commi...
View on Facebook
·Share

With the number of coronavirus cases rising in Hudson County, the County has been elevated to a “moderate health risk zone.” Hudson is one of ten New Jersey counties to have their risk level elevated from low to moderate, and the news doesn’t come without consequences. On Wednesday, Hoboken’...
View on Facebook
·Share