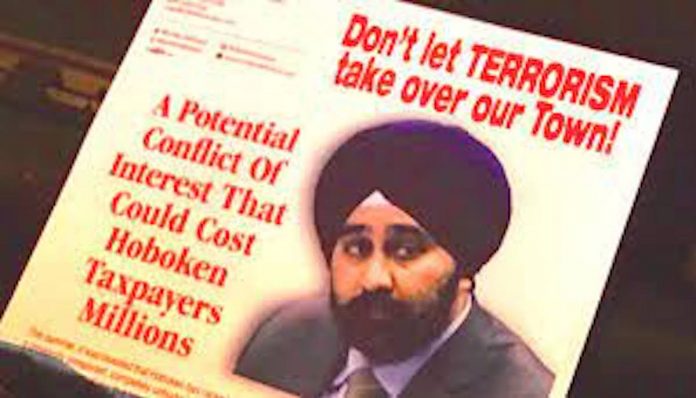 Besides Bhalla, 1st Ward Councilman Mike DeFusco was one of four candidates running for Mayor.

While the resolution passed last night, not every Council member was in support of the measure. 5th Ward Councilman Phil Cohen opposed the resolution, calling it “absurd,” stating, “Like many of my fellow Hoboken residents, I am eager to see those who distributed a racist terrorist flyer days before the 2017 Mayoral election brought to justice. But tonight’s ‘Terrorist Flyer resolution’ does absolutely nothing to help achieve that goal.”

Resolution sponsor, Councilwoman Fisher, in a text to Hudson TV this afternoon, said, “It wasn’t just two Hoboken elected officials who were victimized, it was our whole Hoboken community.  Having the Office of the AG and the Hudson County Prosecutors office lead the investigation would allow for the most independent review and prosecution of the case including members of Hoboken’s own government if necessary.  Like we are seeing in Edison, Hoboken deserves the resources of the highest level of law enforcement to reopen and solve this cold case.”

At every turn, Councilman DeFusco has tried to make himself the focus of this incident that primarily and disgustingly targeted Mayor Bhalla as a so-called “Terrorist”. In the midst of a current wave of violence and harassment targeting members of the AAPI community, the City Council should not be scapegoating the HPD or facilitating Councilman DeFusco’s desire to turn this spotlight on himself — once again — with respect to the unsolved racist attack on Mayor Bhalla in 2017.
I look forward to continuing to support the Hoboken Police Department and other law enforcement agencies in their efforts to stop and prosecute racist attacks.”
The political flyer indicated that Councilman Mike DeFusco’s campaign was responsible for paying for the flyer, stating “Paid for by Team DeFusco for Hoboken.”  Both Councilman DeFusco and Mayor Bhalla have condemned the flyer, with Councilman DeFusco texting Hudson TV this afternoon, saying, “Councilman Cohen’s theatrics last night were unprofessional, disrespectful and frankly outright insulting. The fact that every other other Councilperson put politics aside to vote in favor of a proper investigation speaks volumes to Councilman Cohen’s character.”
Whether New Jersey Attorney General Gurbir Grewal or the Hudson County Prosecutor’s Office moves forward with an investigation is yet to be seen.