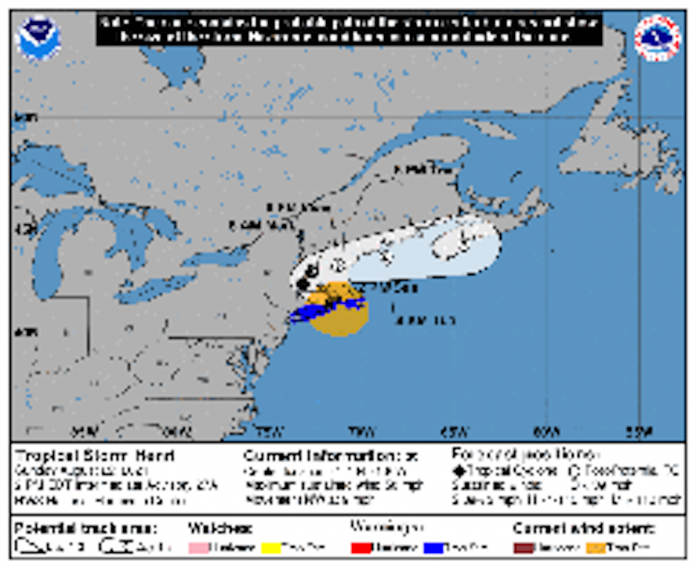 Tropical Storm Henri is tracking to the northeast and the National Weather Service issued a Flash Flood Warning for Hudson County which ended at 5:45 p.m. this afternoon.

So far, Hoboken has received over 5 inches of rain and low-lying areas of the City are experiencing flooding. Flooding occurs when the City receives intense rain of more than 0.8 inches per hour.

The wet weather pump stations are operational and actively working to discharge water and mitigate flooding.

Tropical Storm Henri will continue to impact the area with rain into Monday afternoon, according to the National Weather Service.

Due to the continued storm, the City has extended discounted parking at $5 per 24-hour period at municipal garages from 8 a.m. to 8 p.m. on Monday, August 23. Parking is available on a first-come, first-served basis for residents with a valid Resident On-Street Parking Permit or Temporary Parking Permit.

Do Not Drive or Walk Through Flood Waters

The Office of Emergency Management continues to instruct residents, drivers, and pedestrians to avoid flooded areas. Flooded intersections contain rainwater and sewage. Do not drive or walk through floodwaters. Barricades have been deployed in flood-prone intersections. Please do not drive around barricades. Other intersections not indicated on the hyperlinked map may also experience flooding depending on the severity of the storm event, especially west of Park Avenue.

Report flooded intersections and clogged drain inlets by calling the NHSA Hotline at (866) 689-3970.

After Tropical Storm Henri moves out of the area, the Department of Environmental Services, Fire Department, and North Hudson Sewerage Authority will remove storm debris from roadways, parks, and public spaces.

Street cleaning will take place to assist in the removal of sewage from previously flooded streets and NHSA and the Department of Environmental Services will power wash areas that experienced sewer backups.

Garbage pick-up will occur tonight as scheduled. Residents should place receptacle bins by the curb after 7:30 p.m. Those in the limited business area should place bins at the curb after 9 p.m. For a schedule, go to www.hobokennj.gov/resources/waste-collection.

Please monitor local forecasts for additional advisories, watches, and warnings. Residents are encouraged to monitor the City’s Twitter (twitter.com/cityofhoboken) and Facebook (facebook.com/hoboken) or sign up to receive email or text updates by visiting www.hobokennj.gov/alerts.