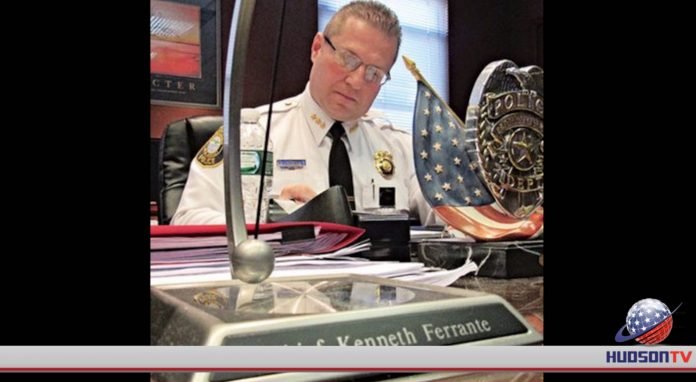 Hoboken Mayor Ravi Bhalla today sent a letter to all nine members of the City Council, urging them to unanimously approve a contract extension for Police Chief Ken Ferrante for three years.  There has been recent debate among the Council for a two year, contract renewal, spearheaded by Second Ward Councilwoman Tiffanie Fisher.

Here is the updated letter Mayor Bhalla sent out to the Council this morning:

I hope you and your families are well. I take this opportunity to write to you regarding Police Chief Ken Ferrante’s contract, which is before the City Council for approval at Wednesday’s meeting. It is my hope that the Chief’s full three-year contract extension will be unanimously approved by the Council after considering the Chief’s record and qualifications.

Through his six years as Police Chief, Chief Ferrante has distinguished himself as, in my opinion, one of, if not the best Chiefs in the entire tri-state area. He has been our crucial partner in keeping our City safe, and even more so now during the unprecedented COVID-19 pandemic, during which he had been on duty for 92/95 days (without overtime, for which he is ineligible for). His record since he became Chief in 2014 speaks for itself:

Quite simply, given this record, it would be a major blow to the City should his contract not be renewed, which would force him to decide whether to continue in his position without the security of a contract, or retire with a full pension, as is a very realistic option available to him. Despite having the ability to comfortably retire, he wishes to remain in his position because of his passion for his profession and love for the city in which he was born and raised. With this contract, Chief Ferrante would also continue to be paid less than six other Hudson County Police Chiefs.

At the last City Council meeting, a resolution was introduced by Councilmember Tiffanie Fisher which attempted to renegotiate the contract agreed to by the administration and Police Chief that cut the submitted contract from three years to two years and reduced the Chief’s negotiated amount of vacation by five days. Certain Councilmembers stated that the proposed contract should terminate at the conclusion of the term of the Mayor in 2021, which would reflect a two-year contract instead of three. I strongly reject the proposal that law enforcement should have any connection with politics or elections. This argument unnecessarily politicizes the Chief’s contract, ignores the fact that the City Council approved the current Fire Chief’s contract that lasts until 2023, two years after the next Mayoral election and, by contrast, provides $60,000 annually less than current Fire Battalion Chiefs.

With nearly three weeks having passed since the last Council meeting, I also trust that the City Council has reached out to the Chief for any clarification or questions related to his position and proposed contract, and is prepared to vote on what is arguably the most important public safety position in the City.

I thank you in advance for your consideration and am hopeful that the Chief’s full three-year contract will be unanimously approved. Please do not hesitate to reach out to my office should you have any follow-up questions.