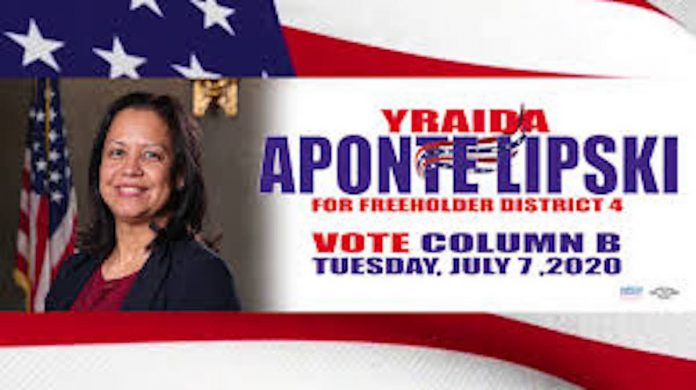 Results of the Hudson County Democratic Freeholder Primary Election from July 7th have been finalized.  The only District where a new Freeholder representative was guaranteed, was District 4 in Jersey City.

Yraida Aponte-Lipski is the winner in that District’s Primary, having defeated Eleana Little.

Aponte-Lipski today thanked voters for their confidence in the following Letter to the Editor:

The results of this year’s primary have been finalized. Thank you for electing me to be your Democratic representative for Freeholder in District 4 in the upcoming general election. Thanks to all the election workers who worked tirelessly to make this election successful, the volunteers who helped me get elected, and the elected officials and Democratic leaders from throughout the county who worked together as a team to achieve this tremendous victory. I truly appreciate it.

A heartfelt congratulations goes to my teammates, the Freeholder candidates from the other eight districts, Representative Sires, and Senator Cory Booker.  I look forward to working hard with them to make sure our Democratic ticket, headed by Joe Biden, wins big in November and addresses the needs of our community.

For those who reached out to me during the campaign, it was a pleasure to hear your concerns. To those of you who I could not meet because of this pandemic, I look forward to connecting with you to hear your concerns and fight for the things that matter in our community.

Again, I’m very thankful for the confidence you bestowed upon me.